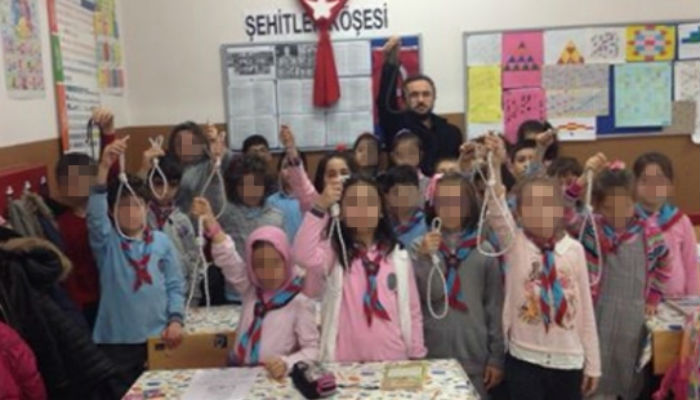 A primary school teacher in İstanbul’s Başakşehir district attracted widespread criticism when he shared photos of his students on social media in which they are seen holding nooses.

As a note to the photo he wrote, “We want justice.”

The teacher, identified as Aydın Erekmen, posted the controversial photo in the aftermath of twin bomb attacks in İstanbul on Saturday night that claimed the lives of 44 people and injured more than 160 others.

Erekmen later removed the controversial picture he had shared on Facebook and also deactivated his account after drawing angry reactions.

In a message from his Twitter account, Tuncay Özkan, a deputy from the main opposition Republican People’s Party (CHP), urged authorities to take action against the teacher, saying he would also file a criminal complaint against Erekmen.

“Action should be taken against whoever this person is, who made a show of death by using children for his dirty political purposes,” said Özkan, calling on the families of the children to also sue the teacher.

Since a failed coup attempt on July 15, the Turkish government and President Recep Tayyip Erdoğan have been talking about reinstating capital punishment, which was abolished in 2004 as part of EU reforms.