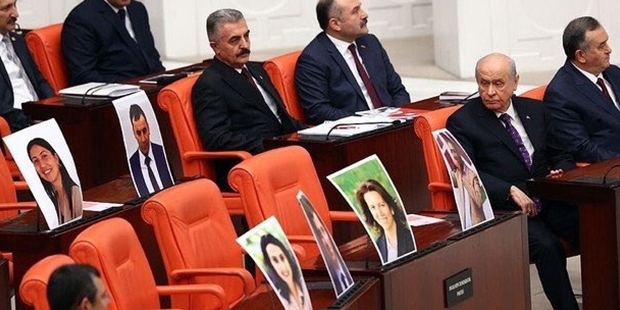 Parliament Speaker İsmail Kahraman convened an emergency meeting of Parliament’s Board of Spokespersons to ask for the removal of photos of 10 jailed deputies from the pro-Kurdish Peoples’ Democratic Party (HDP), according to a report in the Sözcü daily on Tuesday.

Last month, 10 HDP deputies including the party’s Co-chairpersons Selahattin Demirtaş and Figen Yüksekdağ were jailed on the grounds that they refused to testify to a court as part of a terrorism probe.

Republican People’s Party (CHP) deputy Özgür Özel told Sözcü on Tuesday that when Kahraman invited them for an emergency meeting, he thought they would discuss the situation of the jailed deputies, but it later turned out that the speaker would discuss the removal of their photos from Parliament.

HDP deputies placed posters of the jailed deputies in their seats in Parliament following their arrest.

Kahraman reportedly told HDP deputy Pervin Buldan, the deputy parliament speaker, to ensure the removal of the photos while she is presiding over a session in Parliament, but Buldan reportedly refused to carry out Kahraman’s orders.