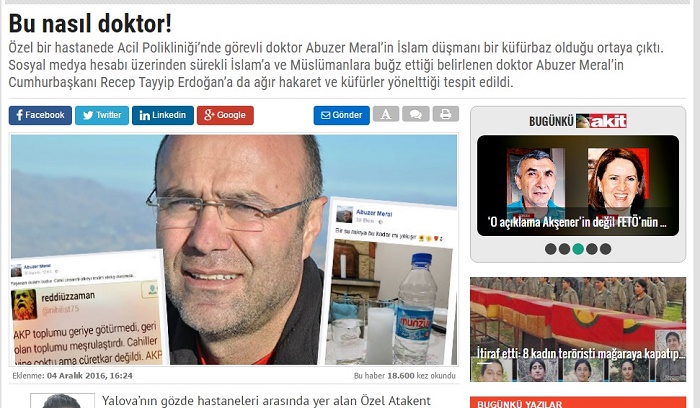 Abuzer Meral, a doctor at a private hospital in Turkey’s Yalova province, lost his job after the pro-government Yeni Akit daily targeted Meral over his criticism of compulsory religion lessons in schools.

Meral said he had criticized on Facebook the fact that his son was ordered to pray during a compulsory religious class at a secondary school in Yalova. When he claimed to have received threats from school management, a news article in Yeni Akit targeted Meral on Dec. 4.

“Abuzer Meral, a doctor in the emergency ward of a private hospital, has turned out to be a foul-spoken enemy of Islam. Found to have Facebook posts through which he shared his ill feelings towards Islam and Muslims, Abuzer Meral also appeared to have insulted President Recep Tayyip Erdoğan,” read the article.

Meral confirmed his dismissal saying: “I was dismissed from my hospital as of today. I, on no account, blame them. They were told to do so.”

“My only struggle is for an environment of peace and brotherhood where citizens from all walks of life live together in a respectful manner,” Meral later said on Facebook. (Turkey Purge)