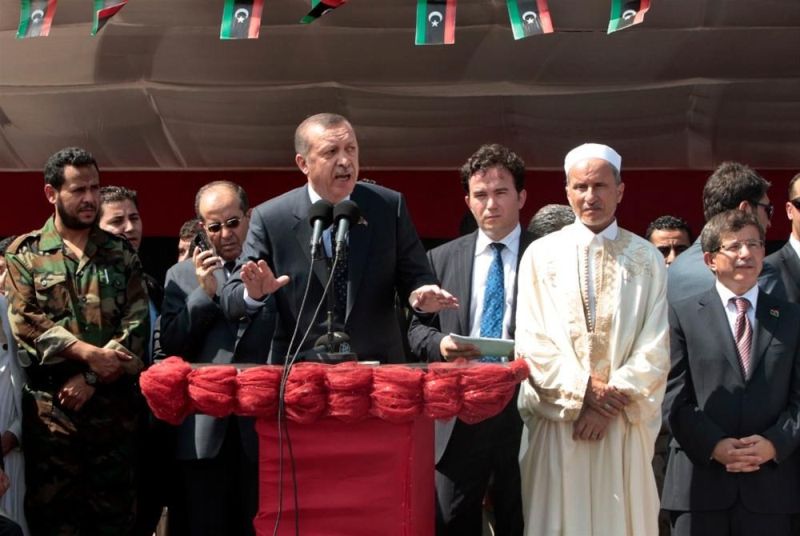 There is enough evidence to conclude that Turkey’s Islamist rulers got their hands bloodied fanning the civil war in Libya by arming rebels with whom they share an ideological affinity and throwing further fuel on the fire that engulfed this Arab nation with violence and instability.

A newly emerged document indicates that the government of Turkey, led by then-prime minister and now president Recep Tayyip Erdoğan, was closely involved from the start in arming groups that ousted Libyan strongman Muammar Gaddafi. It also shows Erdoğan and his top Islamist associates have not just limited their malicious campaign of vilification against established Arab rulers to diatribes and harsh remarks but that they in fact supported the campaign with policies that funded and armed opposition groups in Arab nations.

The document, revealed from the authenticated email communications of Erdoğan’s son-in-law Berat Albayrak, who is now energy minister, came to light when the owner of a bankrupt sea shipping and container company asked for compensation from the Turkish government over damage his ship sustained while transporting arms between Libyan ports on the order of authorities in Ankara. The letter was sent to Albayrak by his aide Ertuğrul Altın on July 8, 2014 after the latter received it from Mümin Şahin, the owner of the freight company and his brother-in-law. In the letter Şahin revealed all the details of a Turkish government-approved arms shipment to rebels in Libya while trying to get compensation for damages the freighter sustained during the voyage.

The freighter, the Irmak, was first contracted by controversial charity group the Humanitarian Relief Foundation (IHH), which is closely backed by Erdoğan due to its ideological leanings. The IHH, accused of arms trafficking to Syria in documents provided by Russia at the UN Security Council, loaded humanitarian supplies on this Libya-bound ship at Istanbul’s Zeyntinburnu port. The cargo was offloaded at the port of Misrata on April 22, 2011. On its return trip, the ship was contracted by a shell Turkish-Libyan partnership company to deliver a cargo from Benghazi to Misrata. The contract said in its manifest that 16 container loads included medical supplies.

During the loading process, the ship’s captain, Abdullah Şahin, became suspicious and wanted to check the contents to make sure they were not listed as prohibited goods under international rules and regulations. When he realized that the cargo was arms rather than medical supplies as indicated in the contract, he refused to load it onto the ship. The next day, Turkish Consul-General in Benghazi Ali Davutoğlu and a Libyan official named Muhamed Alreaht paid a visit to the ship’s captain to pressure him. Davutoğlu said the shipment was approved by Erdoğan’s prime ministry and that the shipment was a matter of national security for Turkey. He noted that Çağatay Erciyesoğlu of the Foreign Ministry was aware of the case and was monitoring the shipment’s progress. The captain balked at the pressure.

The captain was later invited to Turkish Consulate in Benghazi to be further pressured, but the talks broke down this time over the shipment fee. In the end, the Libyan official seized the transport documentation, forcing the captain to agree to a deal by allowing 26 (not 16 as originally declared) containers full of arms onto the ship. The ship entered the port of Misrata on May 1, 2011, through a route that had been cleared of mines by NATO warships. While the cargo was being offloaded, forces loyal to Qaddafi opened fire on the ship, prompting the crew to rush to set sail as soon as the unloading was completed. In the meantime, however, the freighter sustained damage when the shaft to its main propeller was cut and had to be towed to Malta for repairs at the Cassar shipyard. The company could not pay the repair costs; the captain and crew were stranded in Malta; and the freight firm went bankrupt under 1.7 million euros in debt. The owner has continued to write to various government agencies in Turkey for relief but to no avail.

This revelation is hardly surprising given the fact that there was other evidence of the complicity of Erdoğan and his government in arming Islamist rebels in Libya. In a letter dated March 9, 2016, a UN Security Council panel of experts concluded that arms shipments to Libya have been going on mainly from Turkey. The UN experts discovered that the Turkish government deliberately tried to mislead the investigation into a Turkish ship carrying arms destined for Libyan Islamist factions. The ship, the Haddad 1, registered in Bolivia, was seized in September 2015 by the Greek coast guard while transporting a concealed arms shipment from Turkey to Libya.

When asked for an explanation by the UN, Turkey claimed the arms were destined for Lebanon and the ammunition for Sudanese police. The UN investigators were not convinced and decided to examine the seized ship themselves in December 2015. Their conclusion after the trip was that no document or information could be found suggesting that the shipment was destined for Lebanon or Sudan. Instead, they identified two Turkish arms and ammunition manufacturers — Torun Arms and Yavaşçalar – on the manifest. The nautical chart from the bridge and the cargo manifest indicated that the shipment was bound for Misrata and disguised as plastic mats and furniture. The testimony of crewmembers also corroborated this account, exposing lies by the Turkish government on an illegal arms transfer to Libya in violation of UN Resolution 1973 (2011).

This was not the first time UN investigators had found the footprints of Turkey in fueling the conflict in Libya by pouring arms into the country. Turkey’s Konya-based arms manufacturer Yavaşçalar and Balikesir-based Torun were both cited in UN reports on illegal arms transfers in 2012 and 2013, respectively. When the UN experts paid a fact-finding visit to Libya in 2013, they documented that Turkey-manufactured arms were being sold freely in shops in violation of the UN embargo.

The Turkish government’s initial response was that “hunting rifles/cartridges, pistol blanks and rubber bullets” are not subject to sanctions and that they did not require a license, either. The UNSC sanction committee did not agree with that assessment, stressing that they too were subject to restrictions. Then, Erdoğan’s government claimed it had created a working group to set up guidelines on arms exports in a move that was deliberately staged to buy time and bury the issue within the cumbersome bureaucracy. However, the UN finally said in March 2016 by publicly putting out a statement that Turkey had continued to violate the arms embargo to Libya.

In addition to arming rebels and fanning war in Libya, Erdoğan has also been training Islamist militants in his own backyard. The Turkish president’s secret paramilitary force called Sadat led by a retired Islamist general, Lt. Gen. Adnan Tanrıverdi, has been involved in clandestine training of Libyan militants for some time. This rogue general has visited Libya many times, meeting with renegade Libyan officers and receiving red carpet treatment during each visit by the Turkish Embassy in Tripoli. These rebels were even transported from Libya to Syria to join Erdoğan’s fight to topple Syrian President Bashar al-Assad.

A parliamentary question submitted by a lawmaker in January 2015 asked the government about the activities of various Turkish nationals who recruit Libyan fighters for the Islamic State in Iraq and the Levant (ISIL) in exchange for money and commissions. The enquiry, citing unidentified Libyan sources, stated that the Libyan government was apparently disturbed by the activities of these Turkish nationals who it was alleged had ties with the Turkish government. These headhunters were offering a $2,000 monthly salary for each fighter who joined ISIL and the al-Qaeda network while getting a commission themselves of $10,000 for each successful recruitment.

I have thoroughly examined the confidential wiretap records maintained by the police on ISIL suspects in Turkey and found that Libyan militants were intimately involved in the trafficking of jihadists with a political cover provided by Erdoğan’s government. One of the key ISIL operatives in Turkey is a man named Farag H. Hamad Ali, a Libyan national. He was working with other Arab nationals to move fighters in and out of Syria using Turkey as a conduit, providing logistical supplies.

The wiretap records show Farag worked closely with another ISIL trafficker and procurement person named Mohammed Elsayed Eltokhy Salim Elshiemy (aka Abdulhakem Mısırlı), a 26-year-old Colombia-born Egyptian national. Although both men were spotted by authorities while exchanging money and arrested, they were later let go. In a wiretap recorded on March 7, 2015 at 12:09 p.m., Elshiemy was shopping for night vision binoculars in Istanbul’s Karaköy district. He was told by Farag that a 50,000 euro transfer was made for him to purchase military-grade goggles. In another wiretap recorded on March 6, 2015 at 12:31 p.m., Elshiemy asked a man Identified as Abu Davud to supply weapons for ISIL.

Elshiemy had also arranged for fraudulent passports and secured visas for ISIL sleeper agents who were sent to Europe to identify targets and scout the area. For example, in a wiretap dated Oct. 15, 2014 at 17:49 p.m., Elshiemy asked for a fraudulent Libyan passport to move a person illegally. They were securing official Turkish visa stamps by bribing Turkish authorities.

The point man who Erdoğan trusted with managing Libyan affairs is Emrullah İşler, one of the leading ideologues on Islamist policies and dubbed an ISIL apologist when he said ISIL is more humane because at least it does not torture its victims. İşler made trips to Libya, meeting mostly with Islamist brethren and helping undermine other factions. He served as a deputy prime minister in Erdoğan’s government and now heads the parliamentary commission on intelligence and security.

It is clear that Erdoğan, a politician neck-deep in corruption, wanted to prop up an Islamist regime in Libya to pursue his own obscure vision of xenophobic Islamist ideology while tapping into the wealth of this Arab nation. For that, he fanned the civil war and sent arms to militants from Libya to Syria. No wonder the former prime minister of Libya, Abdullah al-Thinni, said this on Erdoğan’s Turkey: “What is coming from Turkey has a negative impact on the security and stability of Libya.”