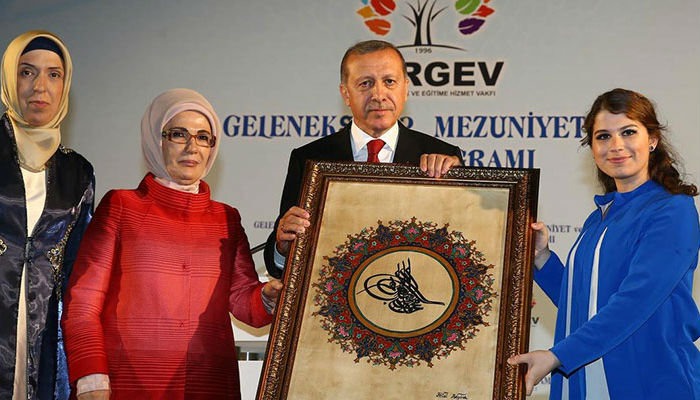 A student dormitory in İstanbul’s Fatih district that belonged to the faith-based Gülen movement but has been seized by the government due to a heavy crackdown it has launched on the movement has been transferred to the Service for Youth and Education Foundation of Turkey (TÜRGEV), an organization where President Recep Tayyip Erdoğan’s son Bilal is an executive board member.

According to a report in the Cumhuriyet daily on Sunday, the men’s dormitory in Fatih was transferred to TÜRGEV instead of the state-run Higher Education Credit and Hostels Institution (KYK).

The name of the dormitory was changed to the TÜRGEV Haliç Women’s Dormitory on the website of the foundation, and its year of foundation was shown as 2016.

TÜRGEV ‘s banners were hung on the inside walls of the dormitory building, which has also undergone some renovation, according to Cumhuriyet.

Erdoğan’s daughter Esra Albayrak is also among the active figures in TÜRGEV.

TÜRGEV’s name first came to public attention in Turkey in the aftermath of corruption probes which went public in late 2013 in which senior government members were implicated.

TÜRGEV also made news in the case of Turkish-Iranian businessman Reza Zarrab, who is under indictment in the United States for helping Iran evade sanctions in financial transactions, when it was alleged that Zarrab, who has been praised by Turkish President Erdoğan, had also made donations to TÜRGEV.

The government is accused of giving state-owned lands and buildings to TÜRGEV either for free or at very low prices.