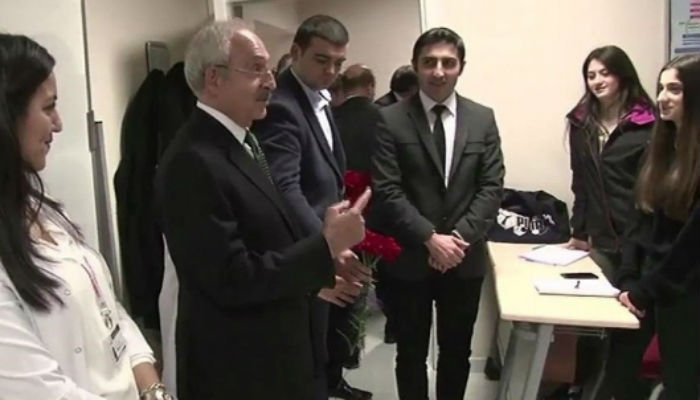 In remarks that underlined the risks of being a journalist in Turkey nowadays, Republican People’s Party (CHP) leader Kemal Kılıçdaroğlu has told a young student who wants to study journalism at university to be aware of the risk of going to jail.

Kılıçdaroğlu met with young people at the Ferhatpaşa Youth Center in İstanbul’s Ataşehir Municipality on Saturday.

The CHP leader asked the high schools students in what field they would like to study at university. When one of the students said she wanted to study journalism, Kılıçdaroğlu replied: “Nice. Then, book yourself a place in prison.”

Another student said she wanted to study politics. In response, Kılıçdaroğlu said, “A dangerous field, but you should all show interest in politics.”

There are currently around 145 journalists under arrest in Turkey, which makes it the top jailer of journalists in the world. The Turkish government’s crackdown on independent and critical journalists came in the aftermath of a failed coup attempt on July 15. Hundreds of media outlets have also been closed down by the government as part of its post-purge crackdown.

Earlier this month, Turkey also arrested 10 deputies from the country’s second largest opposition, the pro-Kurdish Peoples’ Democratic Party (HDP). The party’s co-chairs are among those arrested.