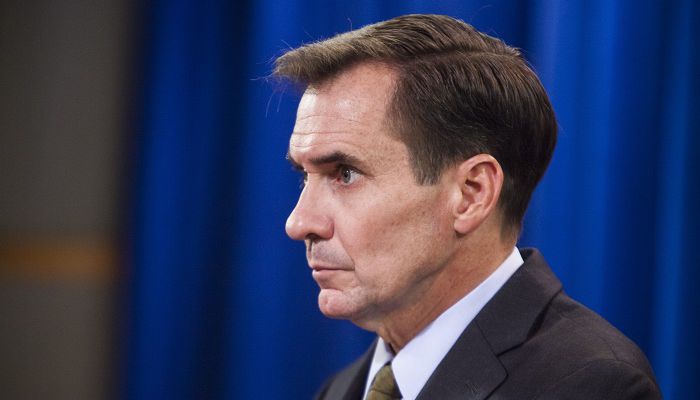 US State Department Spokesperson John Kirby said on Monday that Turkish media outlets did not do anything to alter the impression that the United States was involved in a failed coup attempt on July 15 in Turkey.

Speaking during a daily press briefing on Monday, Kirby referred to Turkish President Recep Tayyip Erdoğan’s remarks on the CBS show “60 Minutes” on Sunday night saying Turkey was disillusioned with the US for not supporting Turkey’s interests and also added that Turks believe the US was involved in plotting the failed coup.

Underlining that the United States had absolutely nothing to do with the coup attempt and that it will continue to support the democratically elected government of Turkey, Kirby said, “… many members of the Turkish media didn’t do anything to stop that impression from growing.”

“I wouldn’t even begin to try to speak for the minds of many Turkish citizens and where they might be getting that idea or the depth to which they believe it. All I can do is, again, assert that it’s a ludicrous claim that the United States had anything at all to do with it,” Kirby added.

When asked about Erdoğan’s demand that US-based Turkish scholar Fethullah Gülen be extradited, Kirby underlined that the US State Department has nothing to do with the matter and that it is under the purview of the Justice Department.

“Our position has always been that we want to have a fact-based discussion about that, and I won’t get ahead of whatever discussions the Justice Department is having,” he said.

Turkey survived a military coup attempt on July 15 that killed over 240 people and wounded more than a thousand others. Immediately after the putsch, the Justice and Development Party (AKP) government along with President Erdoğan pinned the blame on the Gülen movement, inspired by the views of US-based Turkish Islamic scholar Fethullah Gülen.

More than 110,000 people have been purged from state bodies, nearly 77,000 detained and 36,000 arrested since the coup attempt. Arrestees include journalists, judges, prosecutors, police and military officers, academics, governors and even a comedian.

The assets of thousands of businessmen, schools, universities, hospitals, business associations and institutions allegedly linked to the Gülen movement have been seized by the AKP government.