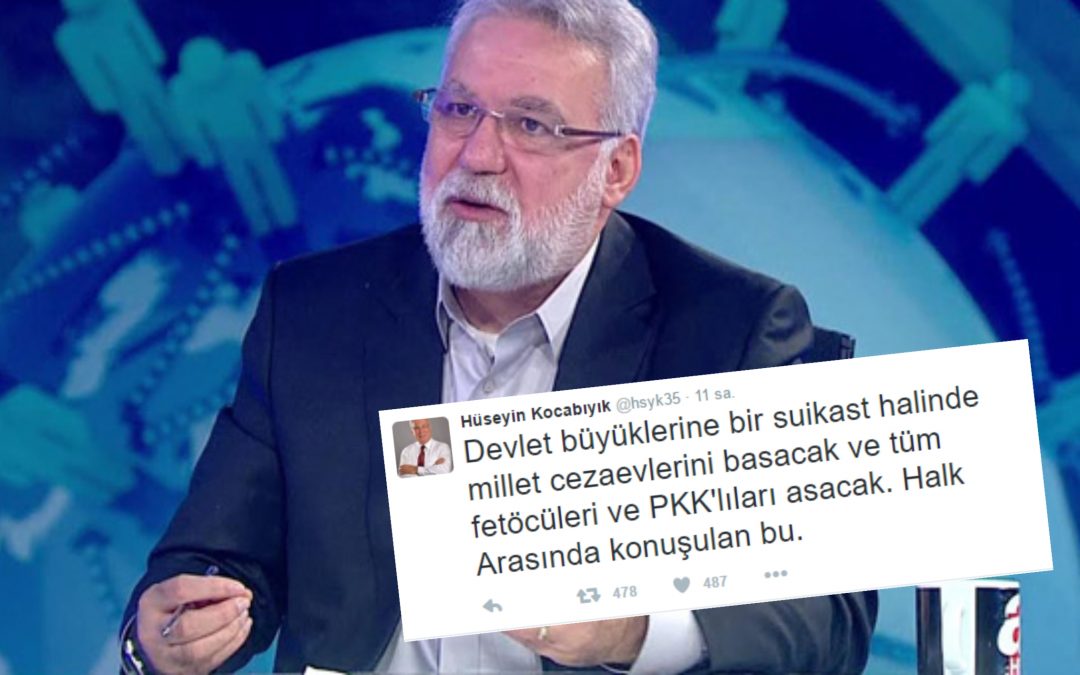 By Okan Turna
On July 15, 2016 Turkey witnessed an unprecedented coup attempt by a faction within its armed forces. While the attempt was still ongoing, Turkish President Recep Tayyip Erdoğan and his government were quick enough to blame Fethullah Gülen, an Islamic scholar who lives in self-imposed exile in the US, and his followers for the bloody coup attempt. Turkey’s secularist and nationalist opposition soon followed suit with a view to getting rid of sympathizers of the movement in the state bureaucracy and to filling these positions with members of their own circles.

In the days following the coup attempt, the government initiated a witch-hunt and purged, detained and arrested tens of thousands of dissidents from all segments of society under the pretext of “cleansing the state of Gülen sympathizers.” In this context, thousands of judges, prosecutors, journalists, public servants and ordinary citizens have been arrested; hundreds of media outlets, schools, hospitals and NGOs have been shut down for allegedly belonging to the Gülen movement despite the fact that there is no court decision stating that the movement is a terrorist organization. Although Mr. Gülen strongly denied the accusations and requested an independent international investigation, his demand fell on deaf ears.

After the purge of thousands of dissident judges and prosecutors, the Turkish government was easily able to take the judicial system under its control and impose its terms on the judiciary. It also managed to oppress the opposition media either by closing outlets down or intimidating them to make sure that no controversial voices about the alleged role of the Gülen movement are heard by the nation. On the other hand, allegations of torture and ill-treatment are rampant all over Turkey, and the government can only show forced confessions as evidence for the involvement of the Gülen movement in the coup attempt.
Meanwhile President Erdoğan forged an alliance with the ultranationalist and secularist pro-Euroasianist Homeland Party, old figures of the deep state and well-known mafia leaders.

Many analysts of Turkey agree that this alliance is determined to distance Turkey from the West and cause it to maintain closer ties with Russia, Iran and China. Thus, Mr. Erdogan and his new allies will not have to respect values such as democracy, the rule of law and human rights and can shape a new state apparatus that enables them to realize their autocratic tendencies without any restrictions from the Western world. Their oppression against opponents under the guise of restoring democracy aims at silencing every single opposition group that can voice concerns about the direction in which the country is headed.

Nowadays pro-government media outlets and pro-Euroasian political figures are claiming without presenting any evidence that jailed Gülen followers are devising a plan to escape from prison. This follows the statements of retired Col. Atilla Uğur, deputy chairman of the Homeland Party, who claims that supporters of the Gülen movement are planning to stage a “second” uprising.

These allegations are also supported by pro-government circles. A series of tweets by a pro-government Twitter troll named Ahmet Üstün in which he called on the government to kill all Gülen followers in jail read as follows:

“All the necessary measures should be taken for the immediate killing of all FETO [a derogatory term used for the Gülen movement by government supporters] members in jail in the event of a second coup attempt. There should be no other inmates in the prisons where FETO members are jailed. Special execution teams should be deployed there. FETO and its jailed members should know that only the dead bodies of FETO members who make escape plans can be taken out of jail. The guns of prison guards should be taken away, FETO members including military members, police officers, prosecutors and judges should be collected in one or two prisons. POH [special police units] should operate with the authority to kill 24/7.”

A more recent report by Turkish broadcaster NTV suggests that the security staff at Sincan Prison discovered escape plans of jailed Gülen followers from prison cells. The report was released with a number of hand-drawn electrical sketches which in no way prove that these drawings were really seized from jailed Gülen followers. Taking into account the bad record of the Turkish media in the post-coup-attempt era, the report was found suspicious by many in Turkey.

As many foreign experts and Turkish citizens shared this heinous plan and their concerns with the public, the government seems to have changed the massacre plans in the last few days. An AKP deputy, named Hüseyin Kocabıyık, unwillingly revealed the new plan on Twitter. In his tweet he claimed that in the event of an assassination attempt against politicians, people will raid the prisons and hang all “FETO” and PKK members. This tweet triggered concerns that the government might be contemplating a fake assassination attempt to use as an excuse for mass killings. Installation of heavy weapons including anti-aircraft guns in Silivri, Sincan and Sakran prisons where hundreds of high-level officials are being held further increases these concerns. Detainees in these prisons are alleged to have substantive information to shed light on the situation.

All these reports by the state-controlled media and the remarks of anti-Gülen figures imply that a conspiracy is under way to murder thousands of imprisoned Gülen followers. Tens of suspicious deaths under detention since July 15 further increase the likelihood of such bloody plans. As the opposition is totally silenced or forced to follow the government narrative, there is no social group in Turkey to prevent such a terrible tragedy.

Therefore, the international community should raise its voice to prevent the government from this insane act. If not, these murders could be the last nail in the coffin of Turkish democracy, and the Western world may have to face a Russian-style authoritarian state on its doorstep.