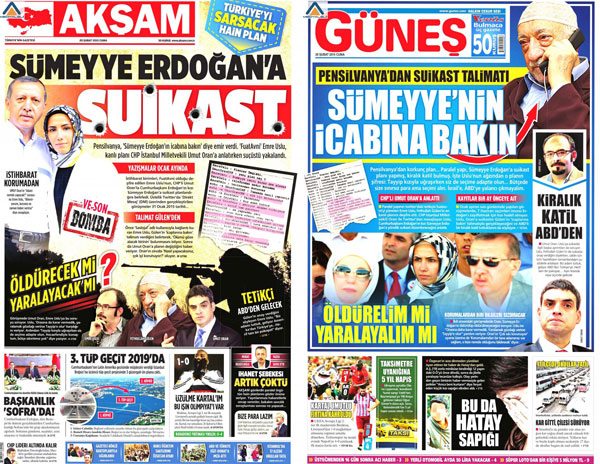 The Güneş daily was ordered on Saturday to pay damages to an opposition deputy for publishing “fabricated” Twitter conversations of him with a journalist which it claimed indicated a plan to “assassinate” the daughter of President Recep Tayyip Erdoğan.

Republican People’s Party (CHP) deputy Umut Oran will receive TL 6,000 ($1,700) in damages from Güneş in addition to an identical amount he received from the pro-government Akşam daily in April for the same fabricated story.

Prosecutors charged the two pro-government newspapers with publishing “fabricated” Twitter conversations which they said were between two opposition lawmakers and a journalist they claimed was the owner of Twitter whistleblower Fuat Avni’s account and which allegedly indicated a plan to “assassinate” the daughter of President Erdoğan.

The Güneş daily had objected to the verdict, but the court confirmed on Saturday that the story was completely fake while the pro-government dailies in the meantime targeted the prosecutors and the courts.

The Akşam and Güneş newspapers, both owned by businessman Ethem Sancak, who has close ties to President Erdoğan, ran front-page stories in February of last year based on alleged Twitter messages between Emre Uslu, a journalist they claimed was the infamous government whistleblower Fuat Avni, and two lawmakers from the main opposition CHP, Oran and Akif Hamzaçebi.

The alleged messages between Oran and Uslu discussed an assassination plot targeting Erdoğan’s daughter, Sümeyye Erdoğan, which had been ordered by Islamic scholar Fethullah Gülen, according to the two dailies.

Hamzaçebi and Uslu, on the other hand, discussed collaboration between the CHP and the “parallel structure” in the run-up to the June 7 parliamentary election, according to the alleged conversations.

The term parallel structure had been invented and heavily used by Erdoğan to refer to Gülen movement followers within the state bureaucracy, although he later expanded it to refer to the entire movement until he replaced it with the term “FETÖ” to label the movement as a terrorist organization particularly, after a coup attempt on July 15.

Oran, Hamzaçebi and Uslu all denied the claims, and Uslu denied that he is the owner of the Fuat Avni Twitter account.

Oran filed separate cases against the dailies, seeing damages. The Ankara 12th Civil Court announced its decision in the case on Akşam and ordered the daily to pay Oran TL 6,000 in damages back in April.

Responding to a legal complaint from Oran and Hamzaçebi, Hüseyin Parlakkılıç, an İstanbul prosecutor dealing with crimes committed via the media, had charged the two dailies with “successive insults and slander.” Parlakkılıç and another prosecutor, Mustafa Gökay, have brought a total of five lawsuits each for the two dailies, according to a report published in the Hürriyet daily.

An 11-page indictment prepared by Parlakkılıç and sent to the Bakırköy Second Criminal Court of First Instance cites an expert report which describes the alleged Twitter conversations as an “inept effort to create fake evidence.”

Oran previously disproved the false accusations after asking Twitter to send documentation of all his correspondence on the site.

Following the second court verdict, Oran said he will donate his awards to the Association for the Support of Contemporary Living (ÇYDD).

The criminal cases against the executives of the Akşam and Güneş dailies, including against former Editor-in-Chief Murat Kelkitlioğlu, have been postponed until Jan. 17.