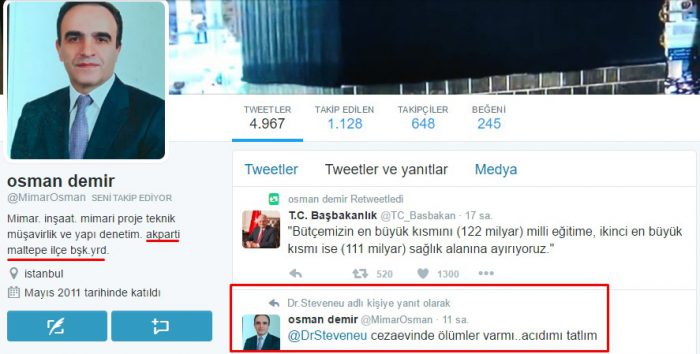 A local Justice and Development Party (AKP) politician in İstanbul mocked the increasing number of suspicious deaths of political prisoners in Turkey following a failed coup attempt on July 15.

Architect Osman Demir, the deputy chair of the Maltepe branch of the AKP in İstanbul, according to his personal profile, wrote on Twitter on Saturday in response to a critic of the “suicides” in prisons the following: “Are there deaths in prisons? Did it hurt, sweetie?”

A total of 25 people who had been imprisoned over links with the Gülen movement and charges of participation in the coup attempt have reportedly committed suicide in Turkey since July 15. Among the victims are teachers, police officers, prosecutors, judges and military personnel .

Meanwhile, a leftist critic of the regime, Ahmet Aziz Nesin, who was also briefly arrested and released in June on charges of terrorist propaganda, protested the alleged suicides in prisons. Nesin argued that these are executions by the regime, not suicides. He wrote on his Twitter account after the 25th reported “suicide” that this is a form of capital punishment as the Recep Tayyip Erdoğan regime could not have executed this many people in such a short period of time even if the death penalty had been reinstated.

Since July 15, Turkey, led by the AKP government, has imprisoned more than 36,000 people over alleged links to the coup attempt, accusing the prisoners of terrorist activity in the absence of due process.