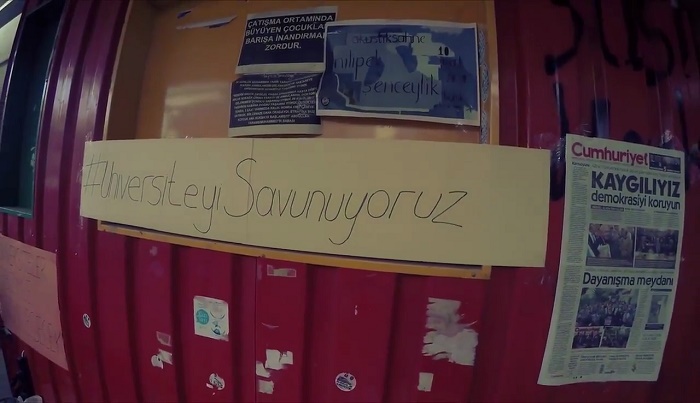 Students from one of Turkey’s top universities prepared a video clip that makes fun of recent government decrees, canceling intra-university elections for university rectors and authorizing President Recep Tayyip Erdoğan with powers to appoint them.

The video clip that went viral on social media after Boğaziçi University students released it on Facebook on Friday was dedicated to Professor Gülay Barbarosoğlu, who received 86 percent of the vote in the rector election in July; however, she still has not been appointed as rector by Erdoğan.

Earlier in October, Boğaziçi students made another video that called on Erdoğan to respect the elections for rector held at the university and to refrain from interfering with the freedom and autonomy of the institution.

Underlining that the video message represents the common voice of academics, students and administrative staff at the university, the Boğaziçi students said, “Even though Gülay Barbarosoğlu received 86 percent of the vote in the election, the official appointment still has not been made in the past three months.”

Professor Barbarosoğlu has been serving as the rector of the university since 2012 after she was appointed by former President Abdullah Gül, and she came first in the last election on July 12. However, no formal appointment has been made by President Erdoğan despite the passage of three months.

Being a top university especially in social sciences, a majority of academics and students at Boğaziçi University are known for their critical stance against the ruling Justice and Development Party (AKP) and President Erdoğan.

By law, the Turkish president can appoint any of the candidates who are proposed to the Office of the President by the Higher Education Board (YÖK). YÖK selects the top three names after an election at a Turkish university and proposes them to the presidency for the appointment of one of them as rector.