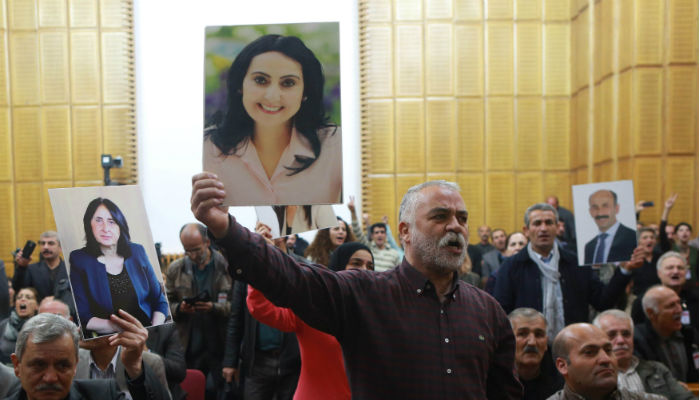 The pro-Kurdish Peoples’ Democratic Party (HDP) parliamentary group meeting, which convened on Tuesday for the first time since the arrest of 10 deputies from the party including itsco-chairs, saw the attendance of many European diplomats and representatives from nongovernmental organizations who showed up to extend their support to the party in the wake of the arrests.

Turkish courts on Friday arrested nine HDP deputies including the party’s Co-chairs Selahattin Demirtaş and Figen Yüksekdağ, who were detained in the early hours of Friday following police raids on their homes. The HDP deputies were arrested after they refused to testify about alleged crimes linked to “terrorist propaganda.” One more HDP deputy was arrested on Monday, bringing the total number of arrested HDP deputies to nine.

Many diplomats from the foreign missions in Turkey such as the Belgian, Austrian and Luxembourger ambassadors, the Austrian deputy chief of mission, the chief clerk at the Greek embassy and representatives from German, Spanish  and Finnish embassies as well as one representative from the Delegation of the European Union to Turkey were in attendance during the party’s parliamentary group meeting, which convenes every Tuesday.

There was also a high level of participation from Turkish labor unions and Alevi organizations as well as other nongovernmental organizations.

The party’s Diyarbakır deputy, Çağlar Demirel, delivered a speech at the meeting in which she offered thanks to everyone showing solidarity with the HDP.

A message Demirtaş sent from prison was read out during the meeting. In his message, Demirtaş vowed to continue the struggle for freedoms and peace.