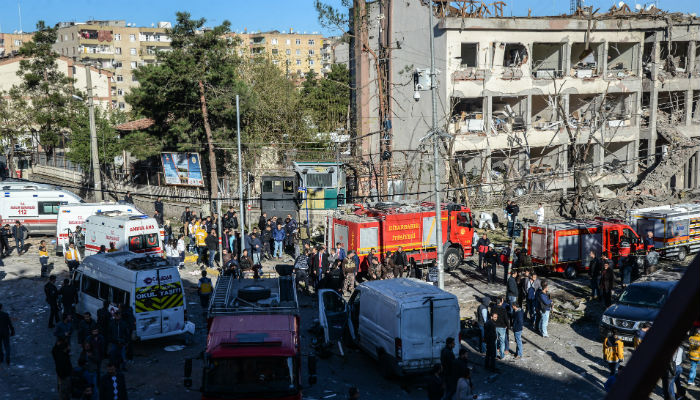 The number of people killed in a car bomb attack in the southeastern province of Diyarbakır on Friday morning rose to nine when one of the injured died in the hospital later in the day.

Prime Minister Binali Yıldırım announced on Friday morning that eight people including two police officers were killed while dozens of others were injured in an explosion near a police station in Diyarbakır’s Bağlar district.

The Diyarbakır Governor’s Office said a car bomb went off at about 8 a.m. local time, adding that the Kurdistan Workers’ Party (PKK) had claimed responsibility.

Media reports said the explosion could be heard from several parts of the city and caused damage to nearby buildings. The PKK reportedly used more than one ton of explosive material to carry out the attack.

The explosion occurred only hours after police detained 11 deputies from the pro-Kurdish Peoples’ Democratic Party (HDP) including its co-chairs.

The government has stepped up a military campaign in the troubled Southeast to eradicate PKK militants, who have launched almost daily attacks since the rupture of a fragile cease-fire last year.

Tens of thousands of people have been killed since the PKK first took up arms in 1984, with the aim of carving out an independent state for Turkey’s Kurdish minority.