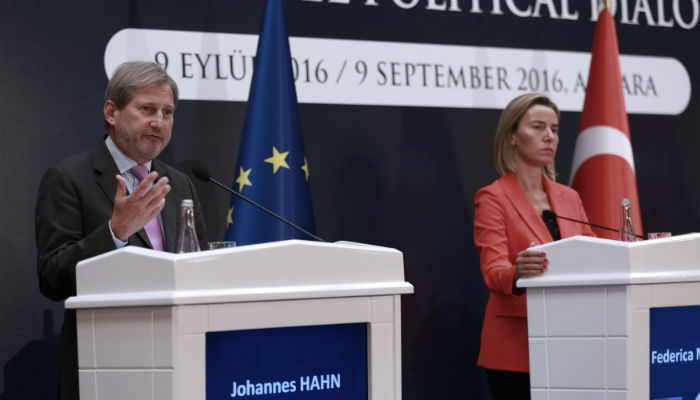 Police raided the homes and detained the co-chairs of the HDP, the second-biggest opposition party in the Turkish Parliament, along with nine other deputies in the early hours of Friday after they refused to testify about alleged crimes linked to “terrorist propaganda.”

Among those detained are the party’s Co-chairs Figen Yüksekdağ and Selahattin Demirtaş, who were described as “both democratically elected leaders and our trusted and valued interlocutors” in the EU Commission statement.

“These developments add to the concerns we expressed after the immunity of more than 130 democratically elected members of Parliament was lifted in May this year. They compromise parliamentary democracy in Turkey and exacerbate the already very tense situation in the South East of the country, for which there can only be a political solution,” said the statement.

The HDP co-chairs as well as 3 deputies from the party were arrested while others referred to court for arrest on Friday afternoon.

According to the statement, the EU considers actions against the Kurdistan Workers’ Party (PKK), listed as a terrorist organization by the EU, as legitimate but at the same time, the EU believes that such actions must never undermine the basic principles of democracy.

“We expect Turkey to safeguard its parliamentary democracy, including respect for human rights and the rule of law, and we are conveying these expectations directly to the Turkish authorities. Together with the Council of Europe, the EU will continue to follow and assess the situation very closely, in constant coordination with all Member States,” added the statement.