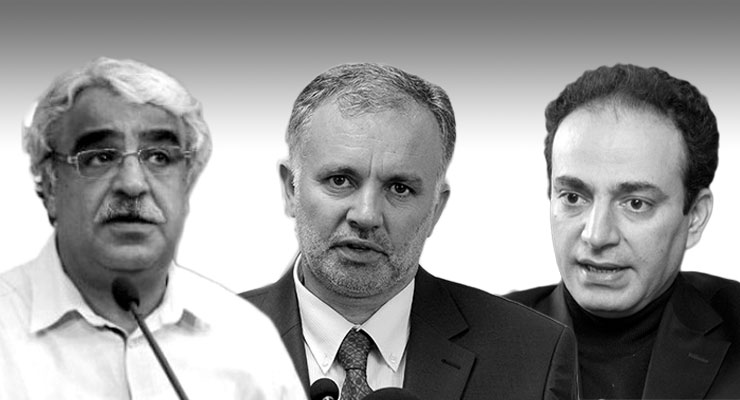 In the wake of a police operation targeting the pro-Kurdish Peoples’ Democratic Party (HDP), which resulted in the detention of 11 deputies, the HDP has made a statement seeking the nation’s solidarity, not for the party but for the prevention of a civil war in the country.

Police raided the homes and detained the co-chairs of the HDP, the second-biggest opposition party in the Turkish Parliament, along with nine other deputies in the early hours of Friday after they refused to testify about alleged crimes linked to “terrorist propaganda.”

HDP deputies Mithat Sancar and Ayhan Bilgen spoke at a news conference held in Parliament on Friday afternoon regarding the detention of the HDP deputies.

Sancar said: “Bombs have been dropped in the heart of Parliament and the country since last night. Not even one deputy in the HDP will bow their head. We will continue our struggle for freedoms and peace. We are four deputies here; others among us could also be taken tomorrow, but we will continue to resist no matter where we are. Our call for solidarity is not for support for us, but to prevent a civil war and save democracy.”

One of the detained deputies, İdris Baluken, was arrested on Friday while others were referred to court for arrest.

The HDP’s Bilgen complained that visitors and press members were blocked from entering HDP headquarters in Ankara on Friday, but he vowed to make their voices heard no matter what happens.

“We call on the public to raise its voice and take a stance [against the HDP operation],” said Bilgen.

Another HDP deputy, Osman Baydemir, who also spoke about the detentions, appealed to President Recep Tayyip Erdoğan and said: “Leave aside arresting us [for a moment]. Even if you mangle us, we will not give up on our demands for freedom.”

After the government’s lifting of parliamentary immunity in June, mainly applicable to HDP deputies in practice, President Erdoğan made clear that the new law would be used to prosecute HDP deputies on “terrorism” charges rather than lawmakers linked to corruption.

The Republican People’s Party (CHP) and the Nationalist Movement Party (MHP) extended their support to the ruling Justice and Development Party(AKP) to abolish the parliamentary immunity of deputies facing potential prosecution.