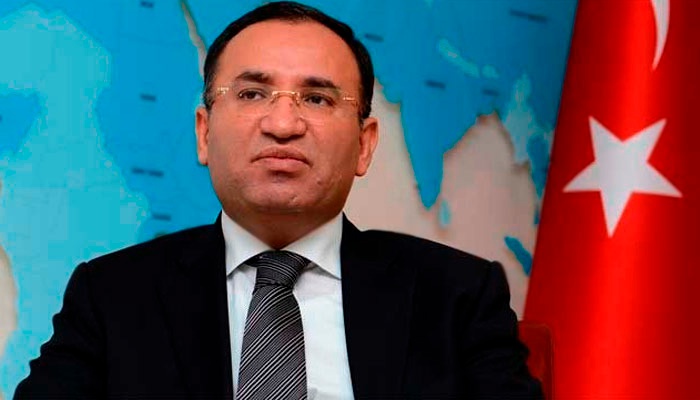 In an apparant move to calm critics of an operation targeting the opposition Cumhuriyet newspaper in Turkey earlier this week, Justice Minister Bekir Bozdağ said the appointment to the investigation into Cumhuriyet of a prosecutor who is a suspect in a trial linked to the Gülen movement was an “unfortunate” move.

The İstanbul Chief Public Prosecutor’s Office on Monday issued detention warrants for 18 journalists from the daily on charges of aiding the terrorist Kurdistan Workers’ Party (PKK) and “FETÖ.” At least 12 journalists including the newspaper’s editor-in-chief, Murat Sabuncu, have been detained so far.

Following the operation, which attracted worldwide criticism, media reports said the prosecutor, Murat İnam, who opened the operation against Cumhuriyet, was a suspect in a trial of judges and prosecutors who are accused of membership in the Gülen movement.

“I see the appointment of that prosecutor as unfortunate. If only such an appointment had not been made,” said Bozdağ.

Eaerier in the day, Deputy Prime Minister Mehmet Şimşek also confirmed reports that İnam was a suspect in a case filed at the Supreme Court of Appeals’ 16th Chamber concerning an investigation into conspiracy claims in the investigation against the Iranian-backed terrorist organization Tawhid-Salam. Fifty-four judges and prosecutors are being tried over conspiracy allegations against Tawhid-Salam, and they are claimed to be linked to the Gülen movement. Forty-nine of these judges and prosecutors have been expelled from their posts by the Supreme Board of Judges and Prosecutors (HSYK).

However, Şimşek said İnam is not one of the judges who has been expelled or suspended from his job as part of investigations into the Gülen movement.

For the past several days, pro-government dailies have been running stories that show the Cumhuriyet daily as a focal point of terrorism, while Cumhuriyet has been claiming that the investigation against it is null and void because it was launched by a prosecutor who is a suspect in a Gülen-linked trial.

In the meantime, an investigation has been launched into Barış Pehlivan, the editor-in-chief of the odatv.com news portal, who was the first to report that prosecutor İnam is a suspect in a Gülen-linked trial.

Pehlivan is facing charges of “targeting individuals fighting against terrorism.”

“If I do not launch this investigation, they will call me pro-FETÖ. If I do, one day jurists will call me a coward,” wrote Erdem, referring to what a prosecutor had told him.

More than 3,500 judges and prosecutors have been dismissed over alleged links to the movement since the July 15 coup attempt in Turkey.