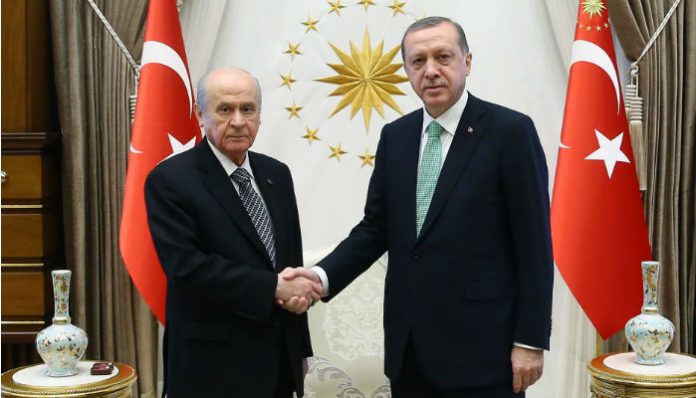 President Recep Tayyip Erdoğan met with Nationalist Movement Party (MHP) leader Devlet Bahçeli at the presidential palace in Ankara on Thursday amid ongoing debates about the introduction of an executive presidency and reinstatement of capital punishment in Turkey.

Their meeting lasted for an hour and was closed to the press. MHP sources said the invitation came from President Erdoğan.

Erdoğan is a strong supporter of an executive presidency.

Bahçeli also responded to a recent call from Erdoğan for the reinstatement of the death penalty and asked the government to join forces to bring back capital punishment.

Erdoğan said on Saturday that legislation to reinstate capital punishment, which was abolished in 2004, will soon be taken to Parliament by the AKP.

In response to Erdoğan, Bahçeli said on Tuesday: “If the AKP is ready [to bring the death penalty back], the MHP is already ready. I am telling Mr. Prime Minister, come on, let’s finish this job together. The MHP will do what is necessary if the proposal or draft on the death penalty comes to the parliament floor.”