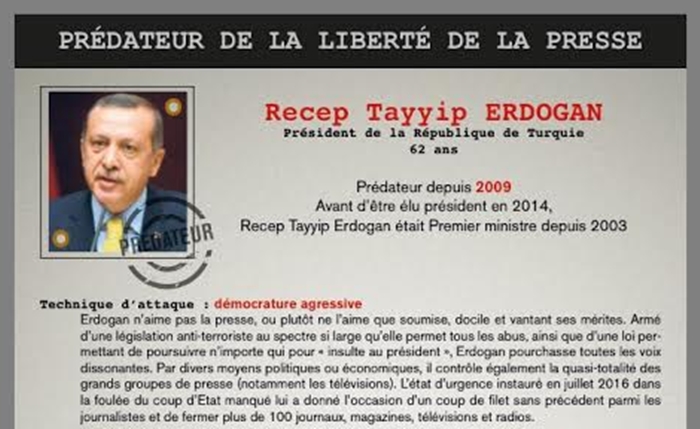 Reporters Without Borders (RSF), a Paris-based international non-profit, non-governmental organization that promotes and defends freedom of the press, has included Turkey’s President Recep Tayyip Erdoğan on its list of leading press freedom predators.

To mark International Day to End Impunity for Crimes against Journalists, RSF on Tuesday published a portrait gallery of 35 presidents, politicians, religious leaders, militias and criminal organizations that censor, imprison, torture or murder journalists, saying most of these press freedom predators have been preying on the media for years, some for decades.

To draw attention to the impunity they enjoy, RSF has filled out a hunting permit for each of these predators. It identifies their favorite attack techniques, their enforcers, their favorite targets, their official discourse – blatant threats by some, complete denial by others – and their kill tally, which in some cases is only too real.

RSF said the techniques of these predators vary, with some using enforcers to torture and murder, some using mass arrests and arbitrary imprisonment, and others employing more sophisticated methods such as terrorism laws, lèse-majesté charges or financial asphyxiation.

“These predators are the ones who most trample on media freedom and commit the worst atrocities against journalists without being held to account,” RSF Secretary-General Christophe Deloire said. “The way to break the vicious cycle of impunity is to appoint a United Nations special representative for protecting journalists.”

The list’s new entrants include Turkish President Erdoğan, who now controls most of his country’s media groups. The state of emergency introduced in July after a failed coup d’état gave him the opportunity to arrest more than 130 journalists and shut down more than 100 newspapers, magazines and TV and radio stations.

RSF described Erdoğan’s attack technique as “aggressive dictatorship under a veneer of democracy.”

The report says: “Erdoğan does not like the media, or rather, he likes the media to be submissive and docile and to sing his praises. He persecutes critics with the help of a law under which they can be prosecuted for ‘insulting the president’ and broad terrorism legislation that allows every kind of abuse. By various political and economic means, he also controls almost all the leading media groups (especially TV channels). The state of emergency declared in July 2016 (after a failed coup) gave him the opportunity to arrest unprecedented numbers of journalists and to close more than 100 newspapers, magazines, TV channels and radio stations.”

A failed military coup attempt on July 15 claimed the lives of more than 240 people and injured a thousand others. Dozens of media outlets in the country, including the country’s best-selling daily Zaman, have been closed down and scores of journalists have been jailed by the government since the putsch.

According to a recent report from the Contemporary Journalists Association (ÇGD), 118 media outlets in Turkey were closed down, 184 journalists were detained, 56 journalists arrested, 866 journalists fired from their jobs and 620 journalists had their press cards canceled during the July-September period.