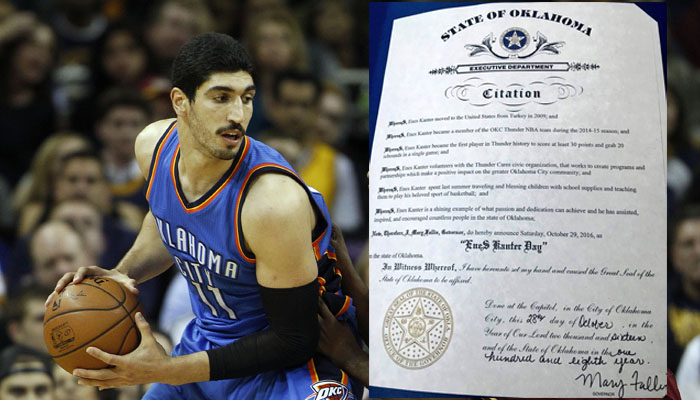 Oklohama Governor Mary Fallin officially declared Oct. 29, 2016 “Enes Kanter Day” for the professional success of the Oklahoma City Thunder player and his dedication to civic organizations in the state.

“I don’t pretend to understand all the political nuances that doreve a wedge between Oklahoma City Thunder big man, Enes Kanter, and his family, but what I do know is Kanter is a man that believes in freedom and human rights. A man with those principles deserves a home and Oklahoma Governor made it official Saturday when she officially declared October 29th, 2016, Enes Kanter Day,” Fallin said at a gathering to present the letter of declaration to Kanter on Saturday.

Twenty-four-year-old Kanter is one of the most famous Turkish basketball players in the NBA, and his family disowned him after he pledged support to Turkish Islamic scholar Fethullah Gülen, living in self-imposed exile in Pennsylvania and who the Turkish government says was behind a failed coup in Turkey on July 15. Kanter later announced that he had changed his last name to Gülen.

“Welcome home, Enes, it’s official, no matter where you go or what you do, you will always have family waiting for you in the Sooner State,” Fallin added.