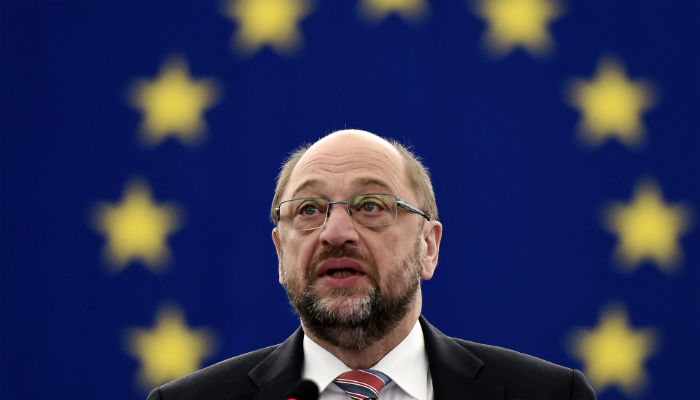 Martin Schulz, the president of the European Parliament (EP), harshly criticized the detention of a number of Cumhuriyet daily journalists, including the paper’s editor-in-chief, on Monday, saying that the detentions are yet another red line crossed against freedom of expression in Turkey.

“Cumhuriyetgzt isn’t just any other independent newspaper: it’s the oldest secular newspaper in the country, an institution of the Republic,” Schulz wrote from his Twitter account on Monday.

Detention warrants were issued for 18 journalists from the daily, and police began to take the journalists into custody one by one on Monday morning. Twelve journalists including the daily’s editor-in-chief, Murat Sabuncu, have been detained so far.

The Cumhuriyet daily is facing an investigation over charges of helping the terrorist Kurdistan Workers’ Party (PKK) and FETÖ.

Schulz said while he had clearly expressed the admiration of the EU for the courage with which Turkish citizens have defended democracy in the aftermath of the attempted coup, the ongoing massive purge “seems motivated by political considerations, rather than legal and security rationale.”

Dozens of media outlets in the country have been closed down and scores of journalists have been jailed by the government since the putsch.

“Debate on death penalty, detaining unaligned mayors, appointing university staff: polarisation rather than unity is what TK [Turkish] gov’t is after,” wrote Schulz in another mesage from his Twitter account, referring to controversial practices of the Turkish government in the aftermath of the coup attempt.