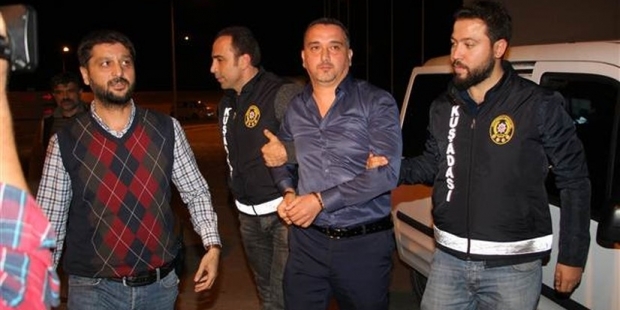 A man who attacked Deputy Chairman of the main opposition Republican People’s Party (CHP) Bülent Tezcan was detained in the Kuşadası district of Aydın in western Turkey late on Saturday.

The man, who was identified as Alparslan Sargın, was taken to the Aydın Police Department. When reporters asked him why he perpetrated the attack, Aslan said, “These handcuffs are a medal of honor given to me by my state.”

Sargın shot Tezcan in the foot at a restaurant in Aydın on Saturday evening.

CHP leader Kemal Kılıçdaroğlu, who spoke to reporters after visiting Tezcan at the hospital on Sunday, said revealing those who were behind the attack on Tezcan is of crucial importance for his party.

“These provocations are being made to stir chaos in the country and for its division. Such actions should not be allowed to take place. Our citizens need to be careful against them,” said Kılıçdaroğlu.

The attack came two months after the CHP leader’s convoy was attacked by Kurdistan Workers’ Party (PKK) terrorists, on Aug. 25 in Artvin province. A member of the Turkish security forces was killed in the attack.

A group of people from the İstanbul branch of the Grey Wolves (Ülkü Ocakları), a nationalist youth movement affiliated with the Nationalist Movement Party (MHP), on Oct. 22 stoned a building in İstanbul’s Bağcılar district where CHP İstanbul deputy Eren Erdem was attending a panel discussion.