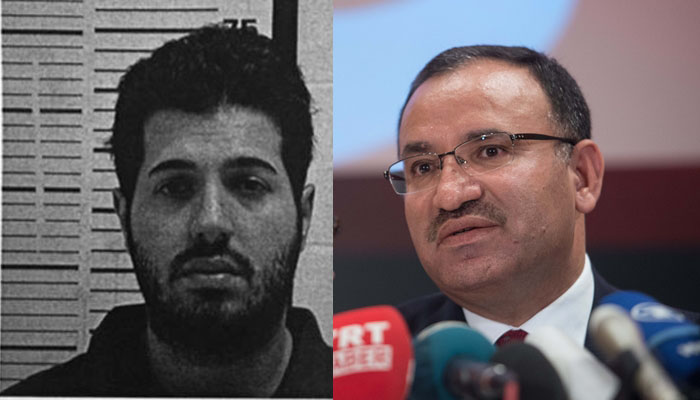 Turkish Justice Minister Bekir Bozdağ, who met with his US counterpart, Attorney General Loretta Lynch, on Wednesday, requested the release of Turkish-Iranian businessman Reza Zarrab, who was arrested in Miami in March on charges of violating US sanctions against Iran.

Meeting with Lynch over the extradition of US-based Turkish scholar Fethullah Gülen, who Turkey’s government accuses of masterminding a failed coup attempt on July 15, Bozdağ also talked about Zarrab’s current situation as an arrestee in the US.

According to Bozdağ’s remarks to Turkish media on Thursday, he expressed to Lynch that Zarrab is a Turkish citizen who followed Turkish laws and regulations while trading gold and is now under arrest in the US because of a law that should not apply to him.

“We think that his [Zarrab’s] trial has been politicized. It doesn’t have a strong legal basis, according to us. As far as I could see from his dossier, it doesn’t appear he committed the crimes he is accused of. The trial is being used to defame our President [Tayyip Erdoğan] and his wife [Emine Erdoğan],” Bozdağ said.

Following Bozdağ’s remarks in media, the US Department of Justice released a statement from its website on Thursday and said: “While we do not comment on pending matters, we would state in the strongest possible terms that the DOJ does not bring cases on political grounds.”

Zarrab was a key figure in a sweeping corruption scandal that broke in late December 2013, targeting President Erdoğan’s inner circle and family members.

US authorities arrested Zarrab in Miami in March on charges of helping Iran process millions of dollars of transactions when it faced US sanctions for its nuclear program. The prosecution of Zarrab in New York produced a new dispute between the two countries as Turkish authorities expressed concern over the case.

In September, President Erdoğan also accused US prosecutors of taking aim at him in the case against Zarrab and said Zarrab is innocent.

Erdoğan told a group of reporters that he had broached the issue of Zarrab during his talks with US Vice President Joe Biden in New York during a meeting on the sidelines of the United Nations General Assembly.

The Turkish president harshly criticized the US prosecutors for trying to implicate him in the Zarrab case by the inclusion of the businessman’s donations to non-profit educational organization TOGEM, which is linked to his family in the indictment.

“They are not pursuing the law, but are after a network of relationships. It’s interesting that the indictment refers to my wife setting up TOGEM and my ties with that association. My wife and I are not among the founders of that association,” Reuters quoted Erdoğan as saying.

In the information about Emine Erdoğan on the Office of the President website, her role as one of the founding members of TOGEM in 2005 is cited.