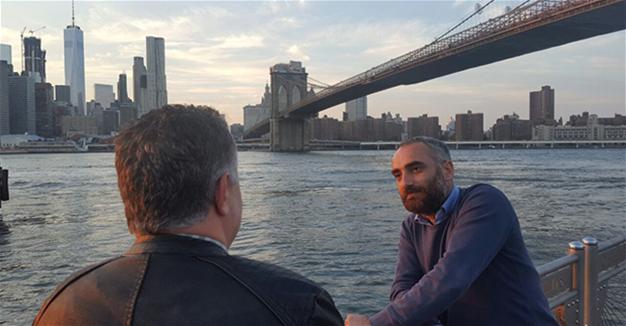 An İstanbul prosecutor has launched an investigation into the Hürriyet daily due to an interview the daily published on Monday with the owner of a smart phone application known as ByLock, Turkish media reports said on Tuesday.

The daily and reporter İsmail Saymaz, who conducted the interview, are reportedly facing charges of obscuring evidence, according to reports.

On Monday the Hürriyet daily ran an interview Saymaz had conducted with David Keynes, the owner of ByLock, in New York. Use of ByLock is being used as a pretext to arrest thousands of people in Turkey on coup charges in the aftermath of a failed coup attempt on July 15.

According to the interview, contrary to the government’s insistent claim that the coup was plotted through encrypted messages on ByLock, the application has been inactive since the end of 2015, long before the coup attempt of July 15.

The interview also invalidates many arguments used by the government to legitimize arrests based on ByLock use.

Saymaz confirmed the launch of an investigation against Hürriyet and himself in a message from his Twitter account on Tuesday morning.

“An investigation has been launched into our report, which presented evidence that ByLock was an organizational communication tool of FETÖ. Look what is happening,” he wrote.

FETÖ is a derogatory term coined by the Justice and Development Party (AKP) government to refer to the Gülen movement.

The journalist claimed that his only “mistake” was to meet with the person who should have been found out by state authorities and interview him and present the strongest evidence to the prosecutor’s office about ByLock being used by the followers of the Gülen movement.

He said the real reason behind the launch of an investigation into him is to cover up the fact that ByLock’s author was in Turkey on the day of the coup and that he left Turkey 20 days after the event without attracting the notice of Turkish authorities.

The last time Keynes left Turkey was Aug. 7, according to the interview.

Saymaz’s remarks attracted criticism from journalist Derya Sazak, who asked how it could be the job of a journalist to provide evidence to prosecutors.

“If the Hürriyet story about ByLock is journalism, how on earth can someone say, upon the launch of an investigation, that their only mistake was to provide evidence about the ByLock-FETÖ link,” Sazak wrote in a message from his Twitter account on Tuesday.