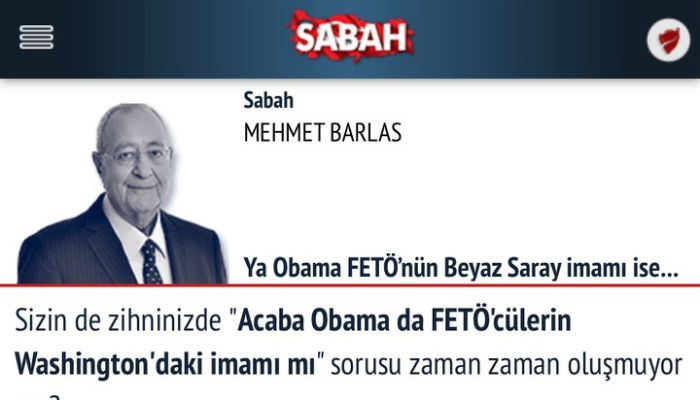 Mehmet Barlas, a columnist from the pro-government Sabah daily who is known as a staunch supporter of President Recep Tayyip Erdoğan, claimed in his column on Wednesday that US President Barack Obama could be an “imam” of the faith-based Gülen movement in Washington.

“Does not the question ‘Could Obama be the imam of FETÖ supporters in Washington?’pop into your mind from time to time? Since his [Obama] father is from Kenya, might not this family have been influenced by FETÖ’s activities in Africa?” wrote Barlas.

FETÖ, which stands for Fethullahist Terror Organization, is an expression coined by the Turkish government to refer to the Gülen movement. In the context of Barlas’s article, an imam does not indicate an official imam but a representative acting in the name of the movement.

The Turkish government, which has been waging an all-out war against the Gülen movement following the eruption of a corruption scandal in late 2013 in which senior government members were implicated, carried its war to new levels after a failed military coup attempt on July 15.

Despite the fact that the government refers to the movement as a terrorist organization, a high criminal court in Hatay province in Turkey’s south in early October rejected an indictment on alleged members of FETÖ, saying that there is no such terrorist organization officially identified.

Barlas said the reason for the emergence of such a suspicion is the policy pursued by Obama. He said Obama is acting as if Turkey is not a NATO ally and is instead an enemy country, and he is standing behind Fethullah Gülen, a Turkish Islamic cleric who lives in Pennsylvania and inspired the Gülen movement with his teachings, “under a judicial pretext.”

The Turkish government has been asking the US to extradite Gülen; however, US officials have reiterated that such a decision can only be made by a US court based on concrete evidence.