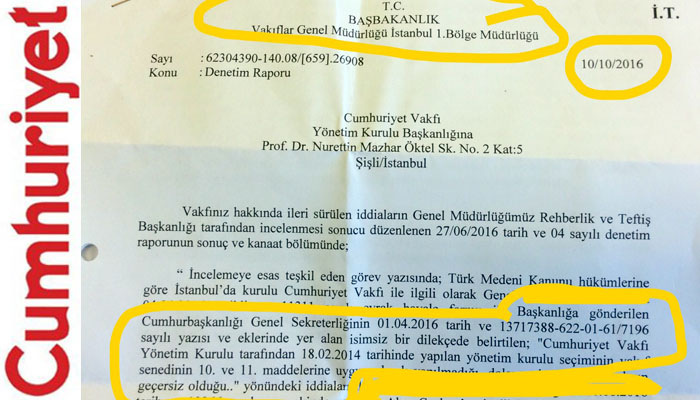 Akın Atalay, CEO of the Cumhuriyet daily, has claimed on Twitter that the Turkish government plans to take over the administration of the newspaper by means of an anonymous complaint sent to the General Secretariat of the Turkish Presidency.

In a series of tweets from his personal account on Friday, Atalay said the General Directorate of Foundations under the Turkish Prime Minister’s Office sent an inspection report to the Cumhuriyet Foundation, which owns the Cumhuriyet newspaper, dated Oct. 10, 2016 claiming an anonymous letter had been received by the General Secretariat of the Presidency alleging irregularities in the election of the foundation’s board members in 2014.

Atalay underlined that the General Directorate of Foundations report contradicts its earlier reports and is legally without merit.

“Some people had gone to the presidential palace in Beştepe for a last chance [to take over Cumhuriyet] and said: ‘You are our last hope to seize Cumhuriyet from this administration. Please step in and give us the Cumhuriyet daily’,” Atalay tweeted.

He also added that some secularists were in collaboration with the presidential palace in order to take over Cumhuriyet. “The most saddening thing is that there are so-called Kemalists, patriots and republicans whose greed and passion have overcome their wisdom,” he said.

“It is praiseworthy (!) to create an opportunity for them to take over Cumhuriyet through the [presidential] palace. However, are you that simple and naive to believe that they will appoint you as a trustee or administrator of Cumhuriyet after the takeover? We won’t let [the takeover] happen. For that, you need to get mired in more scandals, vileness and mud,” Atalay wrote.