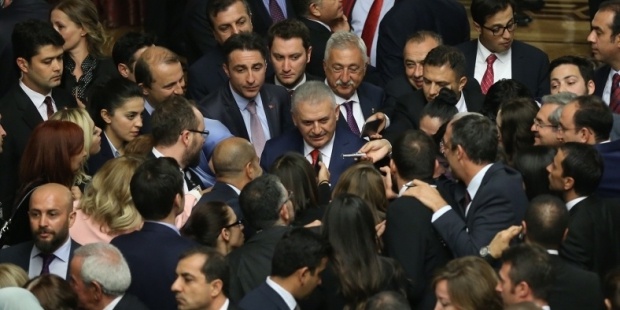 A dispute over the interpretation of the Lausanne Treaty, which established the foundation of the Turkish Republic, as to whether it was a victory or a diplomatic defeat, resurfaced during the opening ceremony of the new legislative year in Parliament, with the prime minister slamming opposition leader.

Yıldırım accused Kılıçdaroğlu of trying to gain political points by taking on the controversial issue.

“For years they tried to sell this treaty as a victory,” Erdoğan had previously said, in an implicit reference to the secular founders of the republic, before adding that the Turkish party at the peace table was unable to negotiate a successful deal.

Erdoğan said with the Lausanne Treaty Turkey gave up territories called the Greek Islands, which are now part of Greece. “Those lands were ours, we still have mosques there,” Erdoğan added, expressing regret over the loss of territory which he called “within shouting distance of Turkey.”

How to interpret the Lausanne Treaty, as a victory or a defeat, remains a contentious issue and sporadically appears in debates between politicians, revealing the lasting repercussions of history on today’s world.