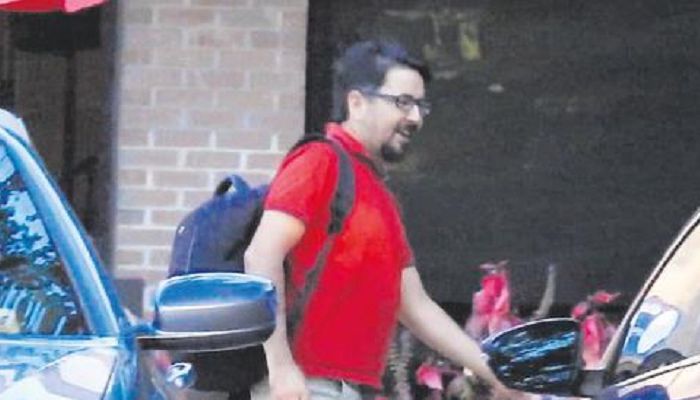 Following a statement by President Recep Tayyip Erdoğan that no country is safe for Gülen movement sympathizers, the pro-Justice and Development Party (AKP) media is continuing to target journalists critical of the government by secretly taking photos of Adem Yavuz Arslan, former columnist and US representative of Turkey’s now-shuttered İpek Media Group, in Fairfax, Virginia.

The Sabah daily, which is run by Serhat Albayrak, brother of Berat Albayrak, the son-in-law of President Erdoğan, ran a series of stories on critical journalists who are now wanted by the police in Turkey.

The stories carried by Sabah had the byline of Abdurrahman Şimşek, Sabah’s special editor on intelligence reporting, with secretly taken photos and videos captured by Sabah photojournalist Serkan Bayraktar in New Jersey, Virginia and Texas.

In the story about Arslan, Sabah ran photos of Arslan that were obviously taken without his permission as he is seen driving his car and walking towards it in a shopping mall parking lot.

Dozens of journalists have left Turkey due to a crackdown on critical journalists and media that began in December 2013, when a corruption scandal erupted.

The crackdown became more oppressive after a failed coup attempt in July, for which the government puts the blame on the Gülen movement, without providing any evidence. A total of 120 journalists are now behind bars in Turkey.

Before flying to New York for the UN General Assembly on Sept. 19, President Erdoğan threatened followers of the faith-based Gülen movement living all over the world, saying that no country is safe for them.“ No country, no region anywhere in the world, is a safe haven for FETÖ [an acronym the government has been using to refer to the Gülen movement] and militants,” he said.

In August, the pro-government media threatened critical journalists with extrajudicial killings. During a program on Kanal 24, Ersoy Dede and Hikmet Genc were discussing how to get rid of critical journalists living in exile by bringing to mind the ASALA case. Dede said that “in this country, I witnessed how ASALA was finished [off]. One morning we will wake up and see some scum being caught at Sabiha Gokcen Airport. The media will cover the story like this: “Tuncay Opcin, Emre Uslu and Ekrem Dumanli …”