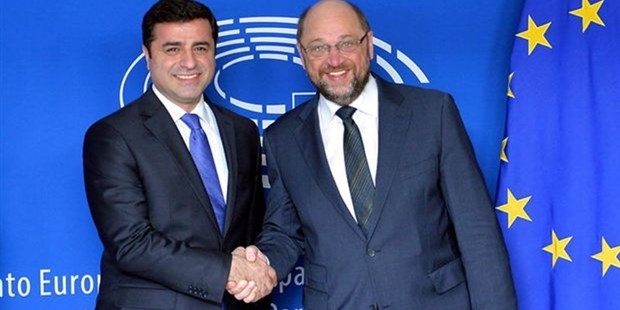 Meeting with European officials in Brussels on Tuesday, pro-Kurdish Peoples’ Democratic Party Co-chairman Selahattin Demirtaş urged the European Parliament (EP) to take the initiative in the solution of Turkey’s Kurdish problem due to its continuing interest in the issue.

Demirtaş said he floated his suggestion to EP President Martin Schulz during their meeting and went on to say that the groups within the parliament could form commissions to work on the resettlement process in Turkey and officially monitor it.

According to Demirtaş, the “war tactics of Erdoğan and the [Justice and Development Party] AKP” are destabilizing Turkey, Syria, Iraq and the Kurdistan region and are continuing to inflame the refugee crisis.

Pointing to the practices of torture, heavy pressure on media and unjust arrests and dismissals from public service in the post-coup period, Demirtaş said these are closely being monitored by the EP.

Demirtaş also said they are as much against President Recep Tayyip Erdoğan’s counter-coup as the July 15 coup attempt itself since Erdoğan’s political understanding cannot tolerate any critical voices.

Speaking to the media following his meeting with Schulz, Demirtaş complained about the appointment of “trustees” to the offices of elected mayors in Kurdish provinces as well as the 165-day-long imprisonment of Democratic Regions Party (DBP) Co-chairman Kamuran Yüksek. He called for stronger democratic solidarity.

Stating that both the president and the prime minister had “bypassed” Parliament, Demirtaş said the AKP has been using the coup attempt, which Erdoğan labeled “a gift of God,” to its own advantage.