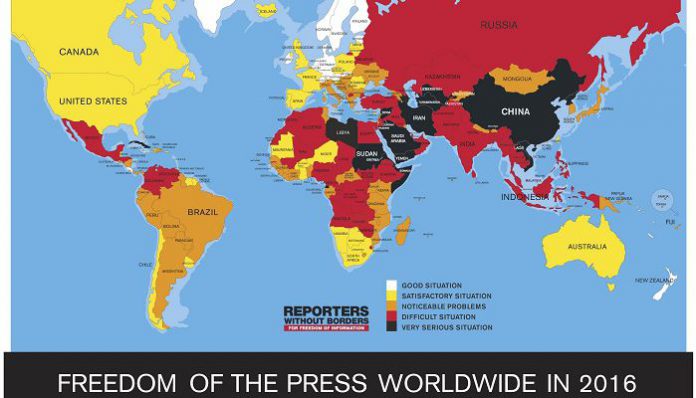 Reporters Without Borders (RSF), in a report released on Monday, called on the Turkish government to rescind decrees that have been enforced under the state of emergency declared after a failed coup attempt on July 15, as the administration continues to target journalists, pluralism and freedom of information.

Urging the government to return to democratic principles, the RSF report gives details of many abuses of press freedom and human rights. The report analyzes the frontal assault on media independence launched by the Justice and Development Party (AKP) and President Recep Tayyip Erdoğan.

Many journalists have been arrested and charged on spurious grounds and without evidence of their involvement in the coup attempt. Declared on July 20, the state of emergency allows authorities to bypass the judicial system, although it is less independent than ever, and to curtail the right to a defense.

The RSF report also underlined that the AKP government took advantage of the state of emergency and ordered the permanent closure of more than 100 media outlets, including newspapers and radio and TV stations, drastically curtailing media pluralism, which had already been under attack.

The state of emergency has also enabled the authorities to impose arbitrary administrative sanctions (withdrawal of passports and press cards) with the aim of discrediting hundreds of journalists and preventing them from working freely. “Those who are arrested can be held in police custody for up to 30 days and can be denied access to a lawyer during the first five days,” the report says.

Johann Bihr, the head of RSF’s Eastern Europe and Central Asia desk, said in a statement on Monday that “Instead of following the example set by the Turkish people, who resisted the putschists on 15 July and defended democracy, the Erdoğan government has pursued an ever-broader offensive against freedom of information in Turkey.”

Bihr said the government is using the state of emergency to jail journalists and close media outlets over accusations of supporting the Gülen movement — a civil society movement inspired by the views of US-based Turkish Islamic scholar Fethullah Gülen, who has been accused by the government and Erdoğan of masterminding the coup attempt — “… thereby flouting the most fundamental freedom of expression and opinion. But the state of emergency is also being used to attack all opposition media outlets.”

Proclaimed five days after the July 15 abortive coup d’état, the three-month state of emergency allows the authorities to govern by decree and detain anyone suspected of “links” with the Gülen movement. Hundreds of journalists – not only those working for pro-Gülen media but also for other media outlets critical of the government – have been arrested, questioned, charged or dismissed.

Turkey’s RSF representative, Erol Önderoğlu, who wrote the report, was also jailed for 10 days in June for taking part, like many other leading Turkish media figures, in a campaign of solidarity with Özgür Gündem, a newspaper that defends Kurdish rights. Özgür Gündem was summarily closed on Aug. 16 under the state of emergency.