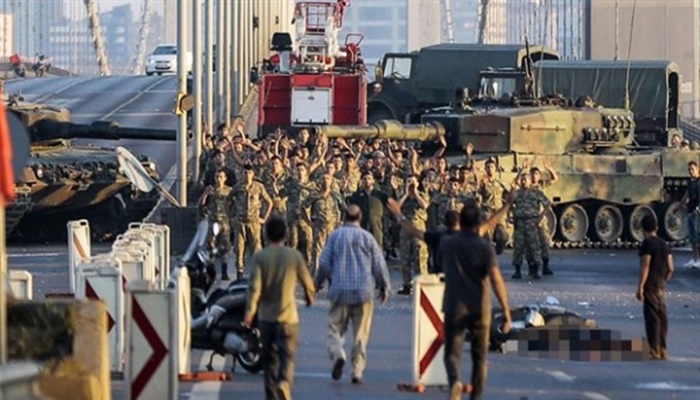 The Turkish media – or what is left of it – has already found Fethullah Gülen guilty of the coup attempt on July 15. When challenged about the evidence, the most common reply is “Come to Turkey and see” or “Everyone in Turkey thinks this way.” This almost unanimous opinion is not a coincidence, and it does imply a monopoly over the Turkish media rather than any objective fact.

Already, the Turkish media has moved on from the coup attempt and nowadays is trying to prove that everything that has gone wrong in Turkey is because of Gülen. TV commentators argue that Gülenists plotted against military officers in the Ergenekon case, but the next day an Ergenekon suspect is arrested for being a Gülenist. One main TV channel even introduced the cheat codes of famous computer game Grand Theft Auto V as secret codes of Gülenist coup planners. However, I will only concentrate on some of the credible (!) arguments.

Military involvement
The argument that Gülen and the Hizmet movement were involved in the coup is shaped around accusations, not evidence. In the first instance, while the coup was still under way Erdoğan accused Gülen of being behind it. Yet, in his own words at that point he had been unable to contact the chief intelligence officer or the chief of general staff. He claimed he had not been briefed before the broadcast he made to the nation, and he didn’t know anything about the coup attempt until his brother-in-law rang him on the evening of July 15. It is hard to pin down when exactly this call happened as Erdoğan gives three different times in three different interviews.

Media channels and TV commentators then started to broadcast this and other accusations, especially in Turkey but also in some foreign media outlets. The most notable accusation comes from Chief of General Staff Gen. Hulusi Akar. He claims that one putschist (Hakan Evrim) offered to put him in touch with Gülen by phone. However, Evrim denies this allegation in his own statement and gives an entirely different story. Is there any evidence at all to support Akar’s claim? Does Evrim have Gülen’s contact details in his phone? Did he ring him? What could be the motive for an officer to try to connect Gülen to the coup at a time when it had already been thwarted (at around 8 a.m. the following morning)?

There are more questions about Akar’s statement. First of all, Akar’s statement is contradicted by three other people who were in the room. Secondly, Akar’s own involvement in the coup is not clear. Thirdly, are the putschists trying to cover their tracks by directing it to a more “convenient scapegoat”? It is plausible that Akar, who is known as a staunch Kemalist, is choosing to comply with Erdoğan’s narrative and clear his own name while supporting further purges of Gülenists.

Levent Türkkan’s confession is also important. He was the aide to the chief of general staff and claims he received orders from Gülenists. However, this “confession” was presented to the media with a photograph in which Türkkan shows signs of having been tortured. Rather than supporting the accusations, the photograph of Türkkan tends to destroy their credibility. If he was indeed tortured, it shows how far some people are willing to go to pin the coup on Gülen.

Türkkan’s photo and reports from Amnesty International raise serious concerns about how reliable accusations can be if the Turkish security forces are using torture to get information or confessions. Also, after the post-coup purge of some 3,000 judges and prosecutors, how fair can the judiciary be? Is it possible that some putschists are being persuaded to cut a deal with prosecutors by giving statements in line with Erdoğan’s narrative in exchange for a pardon?

Brig, Gen. Fatih Celaleddin Sağır’s statement raises still more questions. He says, “I had been going to the [Gülen organization’s] houses and dormitories between 1988 and 1992, attending all their gatherings. I had served the Gülen organization for 10 years. After 2007, especially with the Sledgehammer and Ergenekon operations, I started to move away. I suspended my relationship with them.” First of all, can it be true that a general was able to go regularly to Gülen dormitories and remain within the Kemalist military during a period in which anyone with the slightest inclination towards Gülen or any other religious group would be immediately dismissed? Secondly, even if it is true that he was a Gülen sympathizer in the past, he claims to have left the movement 10 years before the time of the attempted coup. Isn’t the question: So who are you working with now?

Police involvement
It ıs reported that three police officers were captured during the coup. Yet the number of police officers reported to have been purged for Gülenist affiliations before the coup was more than 4,000. If only three of them took part in the coup, then it means that the Hizmet movement did not take part; otherwise, their numbers would have been much greater. Even if we take a close look only at the individuals involved, the accusations do not hold. For example, Mithat Ayrancı was dismissed from the police force for being a Gülenist in 2014, but he took the matter to court, which ruled there was no evidence supporting the accusations against him and ordered his reinstatement. The government did not abide by the court’s decision and he was not reinstated. So there is evidence that Ayrancı justifiably resented his treatment by Erdoğan and the ruling party, but no proof at all that he was a Gülenist.

Questionable link
The most important question mark about the coup attempt concerns a theology professor, Adil Öksüz. He was arrested in a village called Kazancı near the Akıncı air base. The claim is that he is the link between the army and Gülen. However, he said that he was there “to buy land” in the village. He was held in custody for two days and released after his initial statement. Now there is a warrant for his arrest.

At a time when possession of a single book by Gülen or a debit card from BankAsya or even buying credit for your phone from a shop owner known to be a Gülen sympathizer Is enough reason for arrest, it is strange that an individual held to be key to the coup plot can be released and allowed to disappear. It’s even stranger that the judges who ordered his release are not among those purged while so many others have been arrested for having a bank account at BankAsya or subscribing to the Zaman daily.

Missing facts
While accusations are flying about individuals, a great deal of hard evidence is lacking on the actual organization of the coup attempt. Where are the operation plans? Where are the camera records of military HQ and the Akıncı base? What about the phone communications between the putschist generals? What about the GPS traces of all the accused parties such as Adil Öksüz and Akin Öztürk?

It is a stretch to conclude that the coup attempt had anything to do with Gülen or his supporters; if it were, we would have seen many more Gülenists taking part in events.

Very few of the putschists stated any affiliation with Gülen and in fact most confessed to having other secular or Kemalist affiliations. All the important questions still remain unanswered, but the pro-government media goes on rubbing the same few confessions in our face.

*Doctor of philosophy, Director of Centre for Hizmet Studies