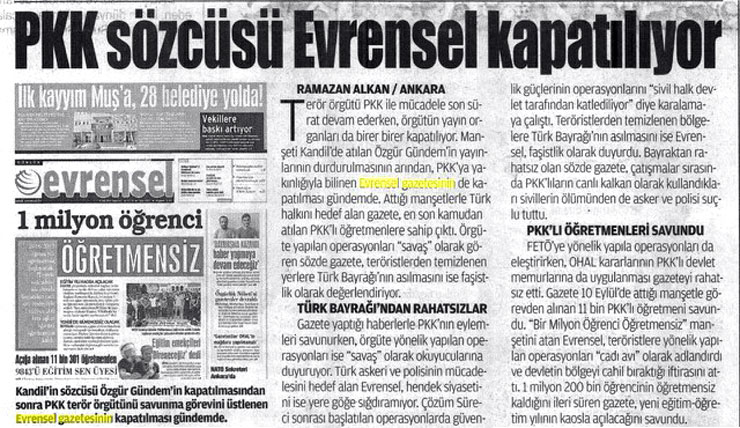 The pro-government Yeni Akit daily ran a controversial story on Wednesday claiming that the government is planning to close down the leftist newspaper Evrensel, which the daily accused of being a mouthpiece of the terrorist Kurdistan Workers’ Party (PKK).

“While the fight against the terrorist organization PKK continues at full speed, the media outlets affiliated with the organization are being closed down one by one. The closure of the Evrensel newspaper, known to be close to the PKK, is on the agenda,” wrote the daily.

He said Yeni Akit needs to reveal its sources to support its claims about plans for Evrensel’s closure.

Polat also said apart from the ongoing cases launched against the daily, Evrensel has received no official notification about plans for its closure.

Dozens of media outlets have been closed and hundreds of journalists have been left jobless in Turkey by the government as part of operations resulting from a failed coup attempt on July 15.