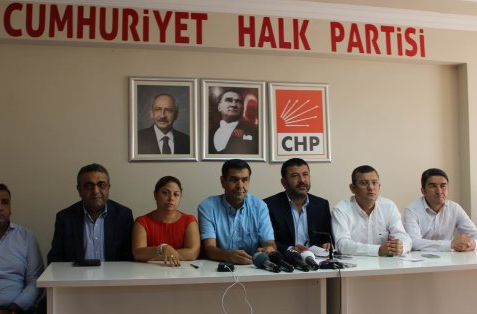 The main opposition Republican People’s Party (CHP) has strongly criticized a government decision to appoint trustees to 28 municipalities, located primarily in the predominantly Kurdish regions of the country, and signaled that it would take the move to the Constitutional Court.

“The power of appointing trustees to municipalities was proposed by the government to Parliament on Aug. 16, but on Aug. 20 the four parties [in Parliament] including the Justice and Development Party [AKP] decided remove it from the bill. If there was a national will, it decided not to add it to the law,” said CHP group deputy chairman Özgür Özel during a press conference participated in by CHP Deputy Chairmen Zeynep Altıok and Veli Ağbaba and deputy Sezgin Tanrıkulu in Diyarbakır on Sunday.

“This is political fraud. This is a blow to the will of Parliament stemming from a meeting at the presidential palace,” Özel added.

Turkey’s Interior Ministry appointed trustees to 28 local municipalities on Sunday, 24 of which were allegedly linked to the Kurdistan Workers’ Party (PKK), while the other four were allegedly connected to the Gülen movement.

Stressing that the government has been using the power of the state of emergency beyond its authority, Özel added: “We will take all these instances of [the government] exceeding [its] power to the Constitutional Court. Some 100,000 people have been dismissed from public service. They have jailed 20,000 people. They have appointed district governors to municipalities as trustees. Who can claim that the coup attempt on July 15 failed?”

“Turkey has been facing a civilian coup by the AKP that has turned the July 15 coup attempt, which was suppressed by the people, into an opportunity.”

“I was in Diyarbakır when the 1980 coup took place. We woke up to the news this morning that trustees had been appointed,” said the CHP’s Tanrıkulu during the press conference, comparing the appointment of trustees by the government with 1980 coup era measures.