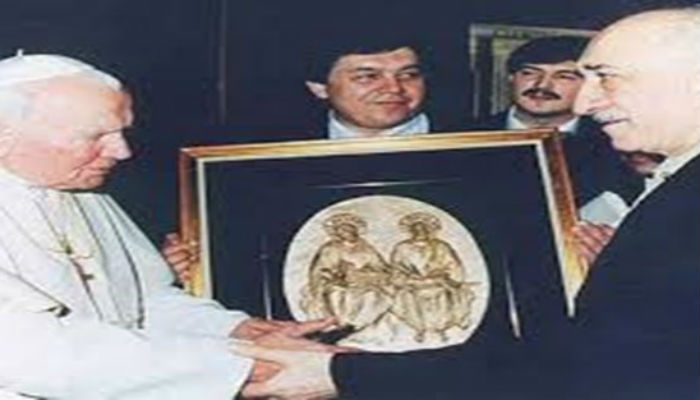 An indictment prepared by an İzmir prosecutor against individuals who were arrested over their alleged links to the faith-based Gülen movement includes the claim that Turkish Islamic scholar Fethullah Gülen was appointed as a secret cardinal by John Paul II in 1998, the pro-government Yeni Akit daily reported on Sunday.

The daily said that the indictment drafted by İzmir public prosecutor Zafer Dur makes mention of a meeting between Gülen and John Paul II at the Vatican on Feb. 9, 1998.

It says 12 days after this meeting, the pope publicly appointed 20 cardinals as well as two others whose names were kept secret in line with the “in pectore” practice, which the indictment says had not been used for a century.

According to the indictment, one of the two cardinals whose names were not released was Gülen.

The indictment said “in pectore” is a term meaning “in the heart” and that it refers “a person who keeps his religious beliefs secret in their country.”

The appointment of the cardinals went into effect on Feb. 21, 1998, added the indictment.

Gülen and the movement he inspired have been experiencing immense pressure from the Turkish government, the president and pro-government circles over the past several years and have even faced terrorism charges.

The government accuses the Gülen movement of masterminding a corruption probe that became public in late 2013 in which senior government members were implicated as well as a failed coup attempt on July 15 that led to the killing of more than 240 people and injured more than a thousand others.

Gülen is a peaceful cleric who has been living in self-imposed exile in Pennsylvania since 1999. He promotes educational activities and interfaith dialogue and attracted huge criticism from radical Islamic circles for his promotion of dialogue among religions and his meeting with John Paul II in 1998.