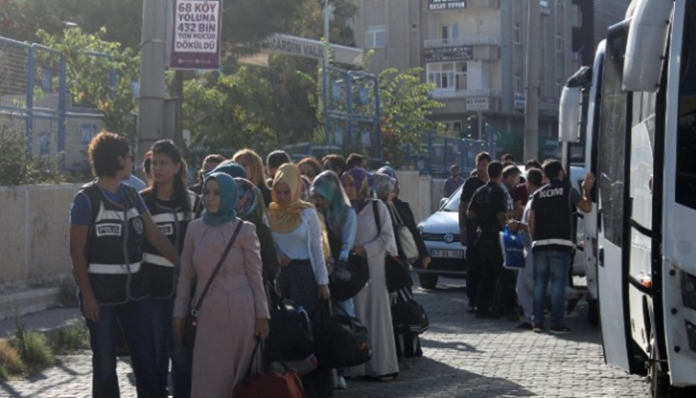 President Recep Tayyip Erdoğan is continuing to carry out a witch-hunt, launched in the aftermath of a July 15 coup attempt, against his critics at full speed. With the emergency rule that was declared with no justification given following the putsch and the government decrees that have the power of law, people are being dismissed from their posts, they are detained, their assets are seized and their passports are revoked, making it impossible for them to leave the country.

On Thursday, 51,000 people were dismissed from their posts in public institutions without undergoing any administrative investigation. They include people from many professions, among them high-ranking bureaucrats such as governors, district governors, judges, prosecutors, doctors and academics.

The number of civil servants who were dismissed from their positions in the aftermath of the 1960 and 1980 military coups does not come close to the figures of today. Including individuals who were earlier fired, comprising military officers, police officers, judges, prosecutors and teachers whose diplomas were cancelled, the total figure today stands at 100,000.

Fundamental human rights and freedoms have been suspended in Turkey, people’s right to work, freedom of the press, the right to property ownership, the right to a defense in a court of law, the right to travel and the right to a fair trial have all been annulled while the principle of presumption of innocence has been totally disregarded. People have been subjected to collective punishment through the practice of “enemy law.”

Around 100,000 civil servants have been dismissed from their jobs without a disciplinary investigation being carried out, in a move that violates all international labor agreements.

One of the most fundamental human rights, the right to property ownership, has been gravely violated. Without any legal grounds, the government has seized 1,300 private schools, hospitals and educational institutions. An interim injunction has been imposed on private property including as many as 50,000 houses, workplaces and parcels of land, while the government has seized bank accounts holding billions of Turkish lira. Under the pretext of preventing the financing of terrorism, the government has also seized dozens of large companies. However, all those seized were built with people’s own earnings.

Dozens of TV stations and newspapers have been illegally closed down and thousands of journalists fired while more than 100 journalists are behind bars. The government considers even the slightest criticism against itself to be a crime since it has no tolerance for dissent.

The principle of the presumption of innocence, which is recognized in the Turkish Constitution as well as in international agreements, is being totally disregarded. While the perpetrator of the coup attempt is not known, the blame has been put on a specific group, and merchants, artists, football players, housewives and businessmen have been demonized and detained on coup charges. Police raids have been conducted on the offices of civil society organizations and foundations, and people have been subjected to collective punishment. On some occasions, when police were unable to find the individuals for whom a detention warrant was issued, they simply detained their wives or children or other relatives instead. The passports of tens of thousands of people have also been revoked.

In addition, travel bans have been imposed on people and hundreds of thousands have been made to suffer due to a coup attempt whose perpetrators still remain unidentified.

Unlimited power has been granted to the police under emergency rule. The pre-trial detention period has been increased to 30 days from several days. As a matter of fact, people are being detained arbitrarily and detentions are turning into a punishment. Prosecutors and judges issue detention and arrest warrants without any evidence or legal basis and in accordance with lists earlier prepared by the government.

The people who have been detained are kept in very harsh conditions and subjected to inhumane treatment, systematic torture, physical violence, threats, insults, sexual harassment and hunger. There have been instances of deaths in detention as people are denied their medication and sufficient food. Fifteen people are crammed into a one-person cell, big sports halls are used as detention centers and people are taken to what are called concentration camps. (Media reports said a concentration camp had been established near Kayseri for detainees facing coup charges.)

While all these unlawful developments are taking place in the country, the lawyers for the detainees are themselves detained and are forced to withdraw from their cases through the creation of an environment of fear, depriving people of their most basic right to defense in a court of law.

Turkey is undergoing a period in which human rights have never been so grievously violated. The word “genocide” is not even sufficient to describe what is taking place in Turkey right now.