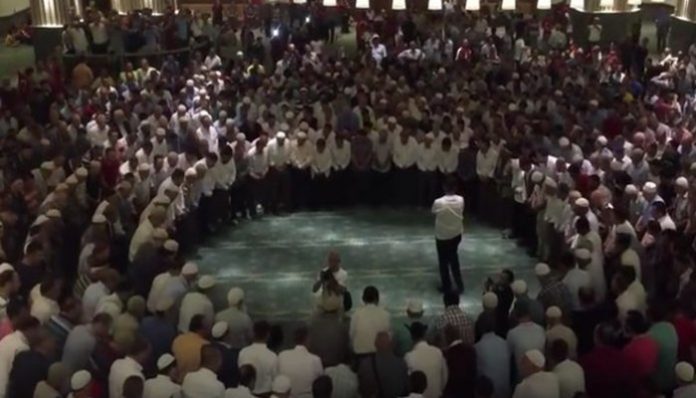 A special religious ceremony, known as a zikr, of a denomination at the mosque in the presidential palace in Ankara has paved the way for a debate about secularism in Turkey.

Talking about a video of the ceremony that recently was leaked to the Internet, Aykut Erdoğdu, a Republican People’s Party (CHP) deputy, warned that this may end in an internal war.

“Headscarves in public, abolishing the military, GATA… And finally, a zikr at the presidential palace. They have been challenging,” said Erdoğdu in a tweet, adding: “You are destroying republic with a FETÖ sledgehammer. You divide society with animosity and hatred. We warn you, the end of this process is an internal war.”

“Zikr at the presidential complex. This is challenging the republic. All republicans should raise their voices,” said Mehmet Ali Çelebi, who was arrested during the Ergenekon investigation and later released, in a Twitter message.

Journalist and academic Dağhan Irak also joined people who criticized the zikr at the presidential palace in a tweet: “A zikr at the palace is the natural result of ‘Yenikapı soul’ and ‘national consensus.’ You agreed, and no one will ask you anymore.”

Sociologist Tayfun Atay evaluated the zikr debate in his column published in the Cumhuryet newspaper on Wednesday. “A zikr stock exchange seems to have been opened under official impetus. In order to not lose out, the other denominations will also race with each other to have a zikr at the presidential palace. The most difficult part of this process to realize is that denominations lose by turning out to be toys in the face of the palace and the world.”