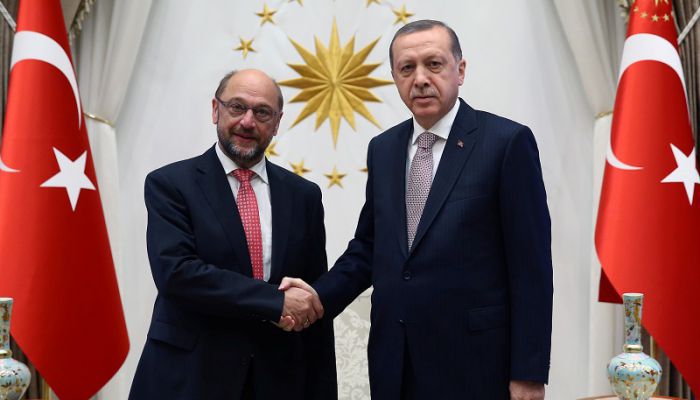 Turkish President Recep Tayyip Erdoğan received European Parliament President Martin Schulz at the presidential palace in Ankara on Thursday amid renewed talks between EU officials and Turkish authorities over the future of a visa deal that seems to be facing troubles.

Erdoğan’s sharp criticism stems from what he said was a lack of adequate support and solidarity from the EU after a putschist army faction tried to topple him in mid-July. Turkish authorities are angered by what they say are the EU’s perceived concerns over post-coup purges instead of the putschist threat.

That criticism has seemed to pay off as EU officials one after another visit Ankara to express solidarity with the Turkish government. Schulz’s visit had dual objectives, sources say. One was to offer strong support for democracy and the Turkish government, and the other was to negotiate the visa deal amid Ankara’s unwavering opposition to making any reforms to Turkey’s notorious anti-terrorism laws.

Schulz earlier in the day held a joint press conference with Turkish Prime Minister Binali Yildirim and renewed Brussels’ demand for a softening of the counterterrorism laws. He, however, was rebuked by Yildirim.

“We as Turkey have made our stance clear: there will be absolutely no wavering, no stepping back, regarding the fight against terrorism,” Yildirim said. “Anti-terror is not just about the safety of the Turkish people but also about Europe’s security,” The Associated Press quoted the prime minister as saying.

Schulz told reporters that differences over the issue do not mean a deal to grant Turkish citizens visa-free access to Europe will fail.