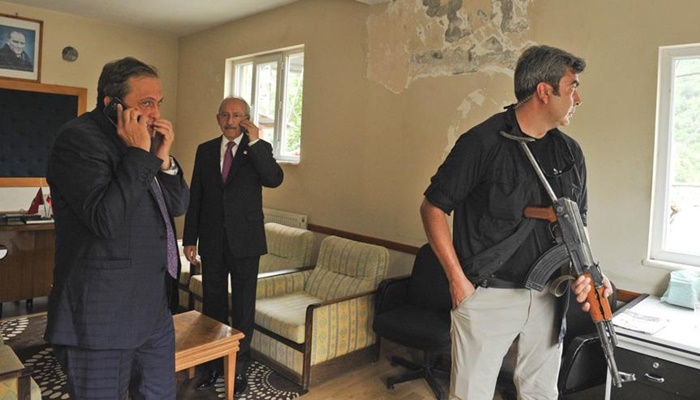 A member of the Turkish security forces was killed in an attack launched earlier today by the terrorist Kurdistan Workers’ Party on the convoy of main opposition Republican People’s Party (CHP) leader Kemal Kılıçdaroğlu in Artvin province.

Interior Minister Efkan Ala had told the media that an attack on Kılıçdaroğlu’s convoy in Artvin province Thursday morning was carried out by Kurdistan Workers’ Party (PKK) terrorists.

Ala added that one conscript was “seriously injured” in the first round of fire by terrorists on the vehicle that was responsible for the security of the convoy. The minister also noted that two noncommissioned officers were slightly injured.

A hospital has now confirmed that the soldier has died from injuries sustained in the attack.

Kılıçdaroğlu had previously told A Haber that one soldier was killed during the attack.

Kılıçdaroğlu added that he was in the district governor’s office in Şavşat waiting for a helicopter to take him out of the area.

The pro-Kurdish Peoples’ Democratic Party (HDP) has issued a statement condemning the attack against Kılıçdaroğlu’s convoy.

“With [the presence of] a machine gun and an RPG, we understand that there was an assassination plot. This is an attack on democracy and Turkey,” said CHP group deputy chairman Özgür Özel during a press conference in Ankara.

The clashes erupted near the district of Andanuç when Kılıçdaroğlu was on his way to Artvin from Şavşat.

Kılıçdaroğlu’s top advisor told Haberturk it was an ambush, but another top advisor of Kılıçdaroğlu later told the media that the attack was not on the party convoy but rather that clashes had erupted.

“We are in a safe place, but the clashes are continuing. I hope no security personnel will be hurt,” said Kılıçdaroğlu to CNN Türk via telephone. He added that they had been taken out of the conflict zone by security forces.

CNN Türk later reported that a terrorist who had planned to launch an RPG attack on Kılıçdaroğlu’s convoy was killed by the politician’s bodyguards.

Kılıçaroğlu has canceled his Artvin program and returned to Şavşat.