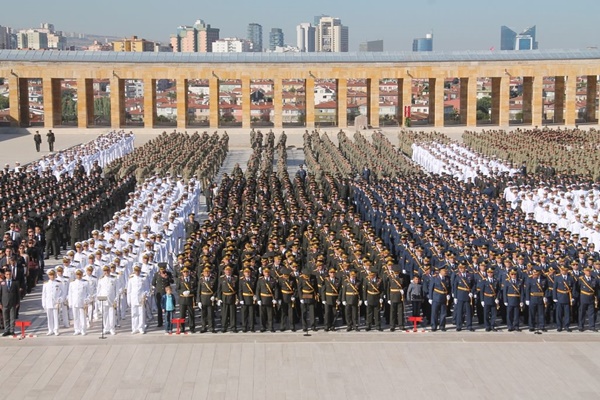 The Supreme Military Council (YAŞ), which convened at the Çankaya Palace on Tuesday, decided to send as many as 586 colonels into forced retirement, an enormous number that many view as a purge.

Out of the 586 high-ranking officers who were forced to retire, 470 were from the land forces, 71 from the naval forces and 45 from the air forces.

The YAŞ decisions were made public by the Defense Ministry after they were approved by President Recep Tayyip Erdoğan.

Tuesday’s YAŞ meeting, presided over by Prime Minister Binali Yıldırım, was held in the aftermath of a failed coup attempt on July 15 that claimed the lives of 242 people and wounded a thousand others when a junta within the Turkish Armed Forces (TSK) attempted to overthrow the Justice and Development Party (AK Party) government.

The AK Party government and President Erdoğan have designated the faith-based Gülen movement, which runs charities, schools and businesses around the world, as a terrorist organization and have launched a widespread crackdown on suspected members since the failed coup attempt. The government accuses the movement of masterminding the coup attempt, although the movement denies any involvement.

A total of 81,494 people have been purged from state bodies, 40,029 detained and 20,355 arrested since the coup attempt. Arrestees include military members, journalists, judges, prosecutors, police and military officers, academics, governors and even a comedian.
According to the YAŞ decisions, the tenure of 434 colonels has been extended for a period of two years. A total of 372 of these colonels are from the Land Forces Command, 27 from the Naval Forces Command and 35 from the Air Forces Command.