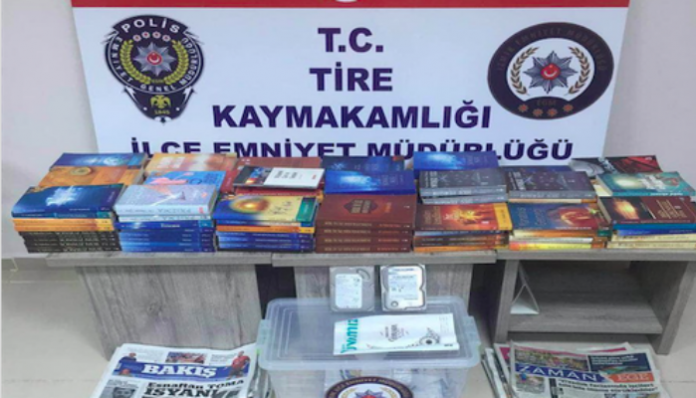 Turkish police displayed seized copies of national dailies critical of the Turkish government and a collection of books penned by Turkish-Islamic scholar Fethullah Gülen as evidence in the country’s western province of İzmir to show Gülen followers as being involved in terrorism.

The police raided several houses as part of an investigation into the faith-based Gülen movement, which the government accuses of masterminding a failed coup attempt last month, in İzmir’s Tire district on Sunday. While five people were detained by the police, old copies of Zaman, Yarına Bakış, Yeni Hayat and Özgür Düşünce newspapers were seized along with tens of books written by Gülen.

In a separate investigation, police raided 32 houses and detained 27 people including  21 women.

Turkey’s Justice and Development Party (AK Party) government which launched a war against the Gülen movement following the eruption of a corruption scandal in late 2013 in which senior government members were implicated, carried its ongoing crackdown on the movement and its sympathizers to a new level after a failed coup attempt on July 15 which killed 240 people and injured a thousand of others.

Although the movement strongly denies having any role in the corruption probe and the coup attempt, the government accuses it of having masterminded both despite the lack of any tangible evidence so far.

The government accuses the movement of being a terrorist organization.

Prior to the coup attempt, Zaman and Özgür Düşünce were seized by the government over their links to the movement. Along with many other critical newspapers, they were closed down by a government decree in the aftermath of the coup.