United States (US) Spokesman Mark Toner has said that the first batch of documents sent by the Turkish government did not constitute a formal extradition request for US-based Islamic scholar Fethullah Gülen.

During a daily press briefing on Thursday, Toner was asked if the documents sent by Turkey constitute a formal extradition request for Gülen.

“..an initial tranche that we had received from them [Turkey] did not, we believe, constitute a formal extradition request,” Toner said.

The US spokesman added, however, that they subsequently received more documents. “We’re looking through them, and I think they’re trying to figure out whether this is the full request. And I don’t think they have reached that determination yet. … It’s not something that is necessarily an overnight process. It takes time to evaluate the evidence that’s presented,” Toner said.

He also rejected once more the claims that US was involved in the attempted coup, saying they are absurd. “…we’re conscious of the fact that after an event like this there’s lots of conspiracy theories, lots of allegations tossed about, but the suggestion that the United States was in any way involved in the attempted overthrow of the government – the democratically elected government of a NATO ally, a major NATO ally, is just absurd,” Toner stated.

As an answer to a question about the massive purges in Turkey that took place after the failed coup attempt, Toner said, “…we’re making very clear that the Turkish Government – again, while we understand the basis for its actions – that it also bears in mind that it must hold true to its democratic standards. … But as to the extent or the scope of the government’s crackdown, if you will, after the coup, we’re watching it closely. We’ve expressed our thoughts about it to our Turkish counterparts and we’re going to maintain that dialogue with them going forward.” 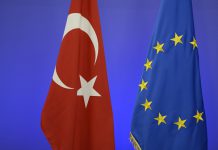