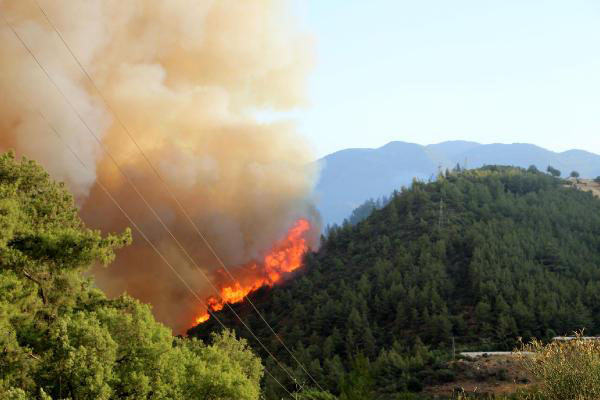 A fire that broke out on Friday in a forest in the southwestern province of Antalya started to grow early on Saturday, while over 100 hectares of green area have burned and a large number of houses were evacuated.

The fire first started in the bushes around a residential area in the district of Kumluca in Antalya. According to reports, 13 houses and large number of olive, orange and pomegranate gardens, as well as greenhouse areas sustained damage in the fire.

Firefighters have been working to extinguish the fire both on the ground, backed by six helicopters.  The helicopter support was halted on Friday night, while efforts on the ground continued until the morning.

The fire was partly under control at around 8:00 p.m. while approximately 50 hectares of area was affected. However, windy weather revived the fire at around 4:00 a.m. on Saturday, spreading it to other forestry areas in the Belen neighborhood.