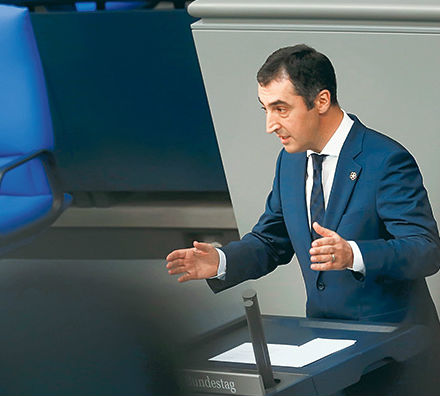 Eleven lawmakers of Turkish origin in German parliament have been put under police protection after receiving death threats over the recent “Armenian genocide” resolution, while one Turkish-German politician called for an entry ban to Germany on President Recep Tayyip Erdoğan due to his provocative remarks against the lawmakers.

According to BBC Turkish, the German Foreign Ministry warned the Turkish-German lawmakers who were targeted not to travel to Turkey, stating that their life safety cannot be guaranteed. The lawmakers were also placed under police protection.

In the meantime, Sevim Dağdelen, a member of Bundestag, suggested that Erdoğan must be barred from traveling to Germany, saying “anyone in Turkey who calls for violence against members of the German parliament should get an entry ban” to Germany. “This includes President Erdogan,” she told the German newspaper “Bild am Sonntag,” according to Deutsche Well (DW) English.

Dağdelen has a Euro 100,000 ($112,000) bounty on her head following the parliamentary vote, the DW English said. Along with Dağdelen, 10 other German deputies of Turkish origin have been receiving death threats from Turkish nationalists.

Two weeks ago, the German parliament voted on a symbolic resolution that labels the killings of Armenians during 1915 and 1916 a “genocide” by Ottoman forces, accepting it with the majority of votes. Later in the same day, Turkey called back Turkish Ambassador to Berlin. The German parliament’s decision also sparked several street protests by Turks in Germany.

Of the German lawmakers who supported the resolution, 11 of Turkish origin were harshly criticized by Erdoğan. In reference to Cem Özdemir, the Turkish-German Co-Chairman of Germany’s Green Party, and other Turkish-German deputies who backed the resolution, Erdoğan said “One smarty comes up, drafts something and presents it to the German parliament. They say [some of them] are Turks. So-called Turks. What Turk? They need to take a blood test in laboratory.”

Calling the resolution “something made up,” Erdoğan said “Hey Germany, you should first answer for the Holocaust. You will also answer for killing nearly 100,000 people in Namibia. You are the last country to declare an ‘Armenian genocide’ in parliament by accusing Turkey. Also, we don’t have an issue with our history in that regard. Our history is not a history of massacres. This is the difference between them and us.” The president also targeted France, referring to the Rwanda genocide.

In the German parliament, only one deputy voted against the decision, while one abstained from voting. German Chancellor Angela Merkel, Deputy Chancellor Sigmar Gabriel and Foreign Minister Frank-Walter Steinmeier had not participated in the voting. On the other hand, Christian Democratic Union (CDU) member Bettina Kudla, who voted against the “Armenian genocide” resolution, stated that it was not the business of the German parliament to make historic assessments concerning other countries.