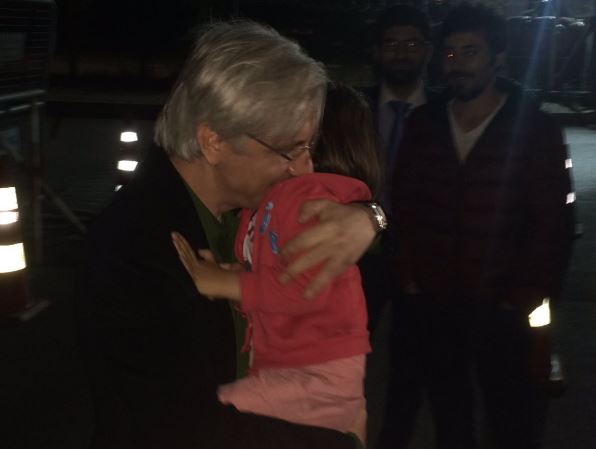 Columnist Gültekin Avcı, who was released pending trial on Thursday, after spending nine months in prison as part of the case into conspiracy allegations against the Iranian-backed terrorist organization Tawhid-Salam, has said that he was not treated as a human in jail.

Avcı was welcomed by his friends and family members in front of the Silivri Prison late on Thursday.

“I got out of the underground to the surface, but I have not reached the daylight from the darkness. Journalism requires paying a price. The press should have honor. What happened to the “Wait for Hope” vigil? Let alone being treated as a journalist, I was not even treated as a human,” Avcı told to the press.

The “Wait for Hope” vigil started when Bütün Dünya magazine’s Editor-in-Chief Mete Akyol began a sit-in protest in front of Silivri on Dec. 2 of last year to show his support for the two recently imprisoned Cumhuriyet daily editors — Can Dündar and Erdem Gül — and continued with the participation of actors, journalists and intellectuals until their release in February 2016.

Avcı also talked about the reason of his arrest, saying, “I spent nine months in jail and the reason is that I discredited muta marriage in a column.”

Muta is a type of marriage permitted in Twelver Shia Islam, where the duration of the marriage and the dowry must be specified and agreed upon in advance.

Hidayet Karaca, the CEO of Samanyolu Broadcasting Corporation, was arrested after police raids on the Zaman daily and Samanyolu buildings in Dec. 2014, along with Zaman daily’s then-Editor-in-Chief Ekrem Dumanlı. While Dumanlı was released four days later, Karaca is still in jail along with three others.

In another incident, Baransu, an investigative journalist for the Taraf daily, was arrested in March, 2015 on charges of publishing classified documents from a 2004 National Security Council (MGK) meeting.

Avcı was detained on Sept. 18, 2015, as he was about to attend the Friday prayer at a mosque in İzmir as part of the Tawhid-Salam investigation, and seven of his columns as well as some of his telephone conversations were submitted as evidence for his alleged crimes. Tawhid-Salam is an Iran-backed terrorist organization that was investigated for three years by Turkish police and allegedly involved high-ranking politicians.

He was arrested in September, 2015 by an İstanbul court on charges of attempting to overthrow the government in seven columns he had written.