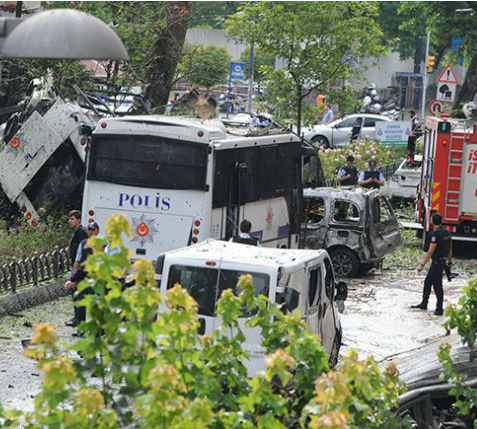 Eleven people, including seven police officers, died and 36 more people were injured in a bomb attack that took place in the Vezneciler area of İstanbul at around 8.40 a.m. on Tuesday morning.

The incident happened when a parked car exploded while a bus carrying riot police was passing by it.

Police and ambulances were dispatched to the scene of the blast, while Vezneciler metro station and roads around the area have been closed to traffic.

İstanbul Governor Vasip Şahin spoke to the press about the attack, saying that a total of 36 injured people – 3 of them in critical condition – are being treated in nearby hospitals.

Some offices and vehicles as well as the Şehzade Mosque in Vezneciler area were damaged due to the attack. Police officers are evacuating the damaged buildings.

Bomb disposal units carried out a controlled blast of a suspicious bag found in a vehicle near the area of the explosion. The controlled blast was announced through the loud speakers of the mosque nearby.

Seven prosecutors, including İstanbul Chief Public Prosecutor Hadi Salihoğlu, have been examining the areas of the blast.

The cause of the explosion remains unknown, although it is estimated to be a terrorist attack.