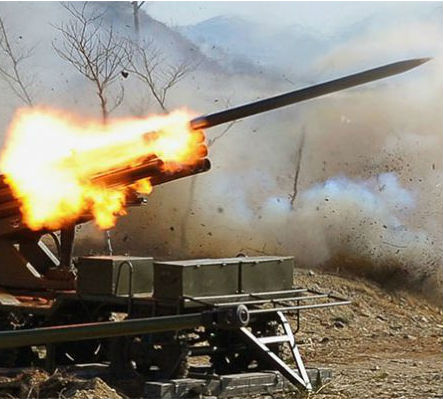 Turkish howitzers combined with airstrikes by the coalition against terrorist Islamic State of Iraq and Syria (ISIS) led by the United States (US) killed a total of 14 ISIS members on Syrian soil in a recent attack, news agencies reported on Wednesday.

Turkey’s attacks were carried out with the use of T-155 Fırtına (Storm), which is a Turkish 155mm self-propelled howitzer, as well as multiple rocket launchers towards ISIS-held areas across the Syrian border. War planes of the US-led coalition hit the ISIS targets from the air at the same time.

According to preliminary reports, 14 ISIS members were killed in the operation. In addition, one tank, two shelling positions, a headquarters and three vehicles belonging to ISIS were destroyed.

It was reported that Turkey’s move came in response to intelligence that ISIS members in three Syrian regions located in northern Aleppo were preparing to fire missiles targeting Turkey.

ISIS missiles have been hitting the southeastern border of Turkey in the recent months. More than 50 rockets have been fired at the Kilis district from ISIS-held territories between October 2015 and January 2016, leaving 16 people dead and injuring 50 others. In January, a rocket fired by ISIS hit a mosque near the Kilis Governor’s Office, killing one and injuring 10 others. Dozens of rockets fired by ISIS have struck empty fields in southeastern Turkey.