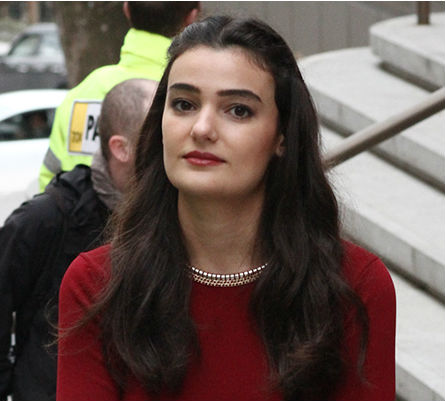 Model Merve Büyüksaraç, who was selected Miss Turkey in 2006, was handed down a year and two months of imprisonment on Tuesday for “insulting” President Recep Tayyip Erdoğan with a satirical poem on her Instagram account during Erdoğan’s tenure as the prime minister.

Istanbul 29th Criminal Court of First Instance, which handled the trial against Büyüksaraç, issued its ruling on Tuesday in a hearing attended by only lawyers of the two parties. Ali Deniz Ceylan, a lawyer representing the model, argued in the court that the complainant is the leader of a country, hence, rights to criticism should be interpreted more broadly.

Ceylan asked for his client’s acquittal, saying that her post on Instagram should be evaluated as political. Erdoğan’s lawyer Hatice Özay, on the other hand, claimed that her client’s personality was attacked.

The former Miss Turkey had earlier told the court that the satirical poem she posted on Instagram had been shared on the social media around 960,000 times. Büyüksaraç also had noted that the comments under that poem included in the indictment against her did not belong to her but other users.