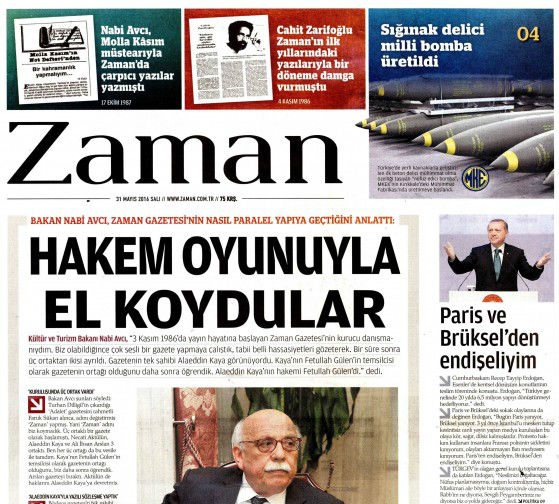 The Zaman daily, which used to be Turkey’s best-selling newspaper until it was taken over by the government in early March on a highly controversial court ruling, adopted a poorly crafted logo that is widely mocked on the social media while under trustee management, because of the daily’s reputation as award-winning in international graphic design contests.

The Zaman daily has won around a hundred international prizes for its graphic design in the past years. The daily’s print edition launched with a new logo on Tuesday and subsequently caused mocking messages by social media users.

Kenan Kıran, newly-appointed editor-in-chief of the Zaman, shared the front page of the daily bearing the new logo in his Twitter feed. Kıran claimed that the change of logo came as a response to readers’ demand.

However, other news sources reported that the company, which was holding copyrights of the former logo, issued a notice to the daily’s government-backed trustee management, saying the logo is being used without permission and asked for its removal.

On March 4, the Zaman daily, along with other entities under the Feza Media group, Today’s Zaman and the Cihan news agency, were seized by the government based on an Istanbul court’s order. An indictment accepted by the Istanbul 6th Criminal Court of Peace accused the daily’s administrators of “terrorism” with no evidence, but only referring to their publications.

Turkish police fired tear gas and used water cannon on hundreds of supporters of the daily to forcibly enter the country’s top-selling newspaper office. Brutal police crackdown during the raid made it to international news agencies and media outlets, including the front page of the New York Times. The court-appointed trustees later laid off hundreds of employees working for the media group.

The takeover of Zaman came as part of the witch hunt launched by President Recep Tayyip Erdoğan and the government against the Gülen movement, a grassroots social initiative inspired by Turkish Islamic scholar Fethullah Gülen.

Following the Dec. 17 corruption and bribery scandal, Erdoğan and the government systematically targeted the Gülen movement and its sympathizers. Erdoğan personally declared he would carry out a “witch hunt” against anyone with links to the movement. Erdoğan also coined the term “parallel state” after December 2013 to refer to people believed to be inspired by the ideas of Gülen, especially those within the state bureaucracy.