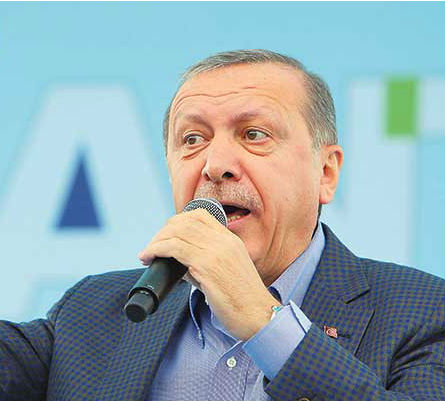 President Recep Tayyip Erdoğan condemned the United States’ (US) support for the Kurdish Democratic Union Party (PYD) and its armed wing YPG (People’s Defense Units) in Syria in a public speech during his visit of the southeastern province of Diyarbakır on Saturday, along with First Lady Emine Erdoğan, newly-elected Prime Minister Binali Yıldırım and his wife Semiha Yıldırım.

Accompanied by a crowded committee, Erdoğan traveled to the predominantly Kurdish province by the presidential jet “ANA” to attend a multiple inauguration ceremony. Extraordinary security measures were taken across Diyarbakır, as a total of 8,500 police officers were deployed.

During his speech, Erdoğan took a swipe at the US and pro-Kurdish Peoples’ Democratic Party (HDP), as well as the terrorist Kurdistan Workers’ Party (PKK).

In reference to the HDP, Erdoğan said “These are atheists, Zarathustras, nothing [good] comes out of them. They are not acting by our values. Sooner or later, my brothers in Diyarbakır will understand who they are. Sooner or later, we will teach them a lesson in polls. We act with polls, while they act with Kandil [the mountain base of terrorist PKK in northern Iraq]. We take our power from the people and God.”

Erdoğan also mentioned May 12’s bomb attack by the PKK in Diyarbakır that resulted in the death of 16 civilians, adding that the HDP is in Parliament even though it is supported by the PKK.

Another harsh criticism by Erdoğan targeted the US for its support to the PYD in Syria due to the close links between the PKK and the PYD. “I condemn the US’ support for the YPG and the PYD. This is not what was promised to us. I believe in honest politics. Those who are ally to us, those are with us in NATO must not and cannot send its own troops to Syria with the emblems of the YPG.”

In his speech at the ceremony, Prime Minister Yıldırım slammed Diyarbakır Mayor Gültan Kışanak, who was elected on the ticket of pro-Kurdish Peoples’ Democratic Party (HDP). Yıldırım vowed to eradicate terrorism in the country, saying “God willing, Turkey will get rid of its terrorism problem. PKK terrorist organization is not concerned about the Kurds. Your problem is the PKK terrorist organization, which Turkey’s problem. We are determined to remove this problem from Turkey’s agenda.”

Yıldırım stated that the government invested TL 25 quadrillion in Diyarbakır over the past 14 years. The prime minister accused Mayor Kışanak of providing logistic support to the PKK. According to Yıldırım, the PKK is preventing a dam project to be realized in the province.