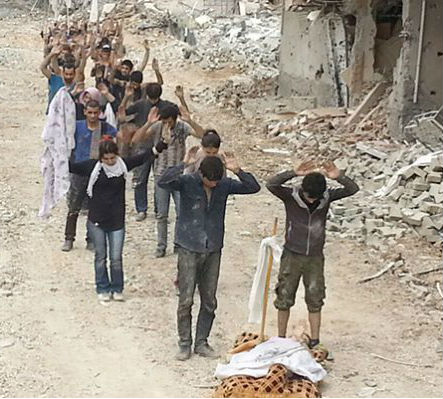 A member of the terrorist Kurdistan Workers’ Party (PKK) blew himself up causing the death of five of his fellow militants, after claiming that he wanted to surrender to the Turkish security forces in the southeastern province of Mardin on Thursday.

The incident took place in the Nusaybin district, where the PKK has recently was dealt a crucial blow from the military operations.

A total of 42 PKK members, including 10 women, turned themselves in to the Turkish soldiers in Nusaybin on Thursday, following the surrender of 25 others only a day before. The PKK claimed that it withdrew its armed groups from the district. Security forces have been making announcements through loudspeakers in the neighborhoods of Nusaybin calling on PKK members to surrender.

On Thursday, another group of PKK members responded positively to the loudspeaker announcements. The group was asked to take off some of their clothes by the soldiers for security reasons. At that moment, one of the PKK members in the group detonated a bomb attached to his body. Five people from the same group were killed consequently.

Other reports attributed to military sources stated that despite the PKK claims of having withdrawn from the area, there are still some 130 PKK members, 25 or 30 them women, deployed in the district, as well as handmade explosives planted in the region.

Since a curfew was declared by the government in Nusaybin on March 14, a military operation has been going on in order to close the trenches dug up by PKK members, remove the barricades built by them and clear the roads of planted explosives. A total of 437 terrorists were killed, while 400 barricades were lifted in Nusaybin since March 14.