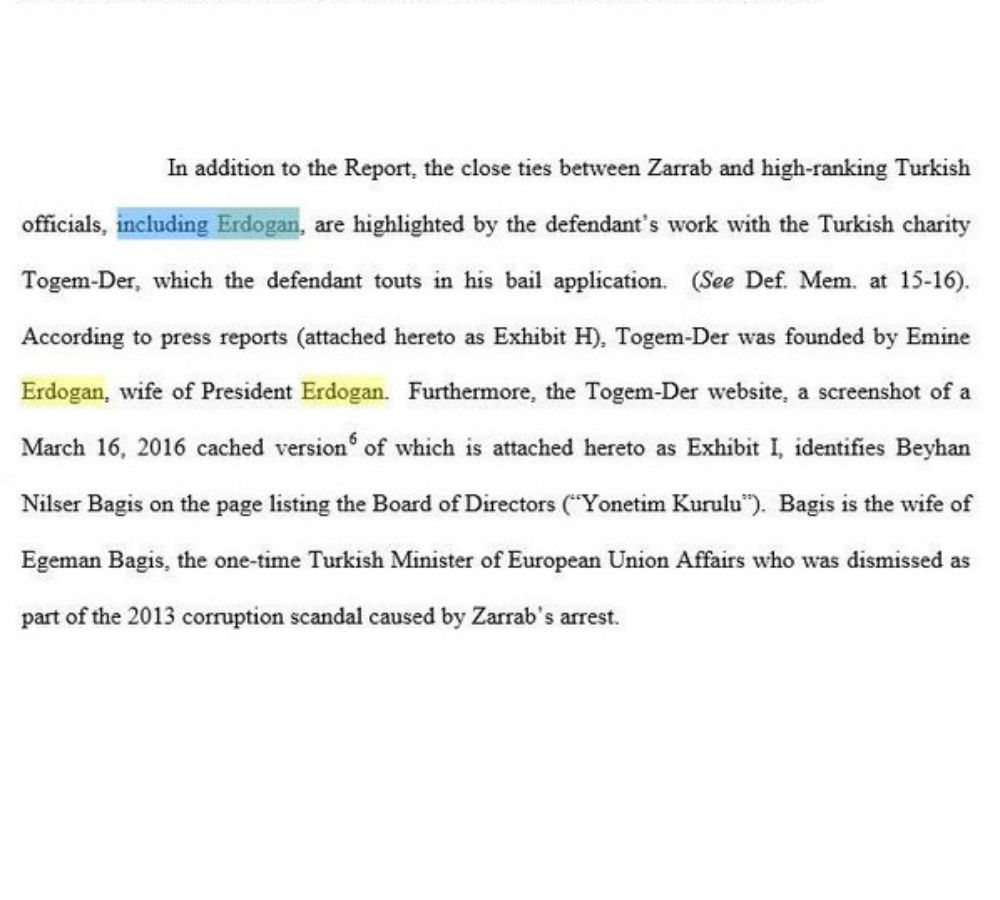 A US prosecutor has asked a federal court to reject a request by a disgraced Iranian businessman for release on bail, citing “overwhelming evidence” and “extraordinary risk” of fleeing.

In a memo submitted to a federal judge in a Manhattan court, the office of Preet Bharara, Southern District of New York attorney, said Iranian businessman Reza Zarrab had acquired “tremendous wealth” to buy homes and yachts but also “to buy access to corrupt politicians in Turkey.”

According to a series of tweets posted by NY Times reporter Benjamin Weiser, the memo said Zarrab, who is at the heart of Turkey’s own corruption scandal, the $50 million bail request by Zarrab should be rejected because there appear to be “credible allegations” that Zarrab secured release from a Turkish prison through bribery and other means.

Bharara’s office revealed that Turkish President Recep Tayyip Erdoğan and the first lady, along with four former ministers and country’s state-run Halkbank’s CEO’s name appeared in Zarrab’s case, who is currently under arrest in the US.

In Turkey, Zarrab is accused of bribing Turkish ministers in exchange of favorable financial dealings as part of a scheme to evade US-led Iranian sanctions. He was arrested in late 2013 in Turkey during twin corruption investigations that targeted Erdogan and his inner circle. He was later released from prison and all charges were dropped.

The prosecutors said, according to Weiser, there are close ties between Zarrab and high-ranking Turkish officials, including Erdogan.

Bharara’s office argued that Zarrab used wealth and influence to secure release from the Turkish prison and hence he should be denied bail.

The first lady’s foundation closed down its website, after it became public that Zarrab wasn’t listed as a donor in the Togem-Der’s website where Erdoğan’s two daughters and dozens of business tycoons across Turkey are named on the list.

The US prosecutors said Zarrab claimed to earn $720,000 annually – a report that is “false” and that he “has amassed a considerable fortune.” They said Zarrab misled court about assets and travel and that he “cannot be trusted to abide” by the unusual bail conditions he proposed.

Zarrab suggested to offer $50 million bond with a condition to in a New York apartment with 24-hour armed guards.

Prosecutors said the businessman’s culpability is “captured in voluminous and unimpeachable emails” and that if convicted, he is facing potentially decades in prison and poses “extraordinary risk” of fleeing.

A criminal organization allegedly headed by Zarrab is claimed to have distributed TL 137 million ($66 million) in bribes to the former economy and interior ministers, their sons and possibly to some other bureaucrats to cloak fictitious exports and money laundering. In documents sent by the İstanbul Prosecutor’s Office to Parliament, former ministers Zafer Çağlayan, Muammer Güler and Egemen Bağış are alleged to have accepted bribes. The ministers allegedly flew on Zarrab’s private jet several times.

İstanbul prosecutors dropped the charges against the suspects in October of 2014.